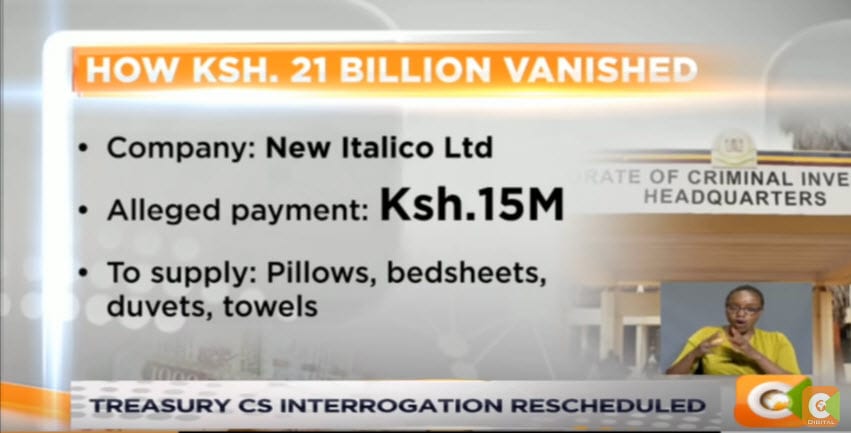 It is now emerging that Treasury Cabinet Secretary Henry Rotich, Devolution Cabinet Secretary Eugene Wamalwa and Treasury PS Kamau Thugge may be questioned by the Directorate of Criminal Investigations (DCI) as detectives dig into the dam’s scandal.

Citizen TV has also sassed out details from the DCI on how Ksh.21 billion was paid out to firms for supply of goods and services.

In some instances millions were paid for bedsheets and towels, in contracts that were supposed to be about the Arror and Kimwarer Dams In Elgeyo Marakwet County.

An investigation file seen by Citizen TV reveals how the money was shared among companies and individuals for supply of goods and services for the construction of the dams.

New Italico Ltd allegedly received Ksh.15 million for the supply of pillows, bedsheets, duvets and towels even as it remains unclear the role this much bedding would play in a construction site.

On its part Tusker Mattresses Ltd was allegedly paid Ksh.10.2 million for supplying  foodstuff even when the construction had not yet to begin. Investigators are trying to find out who were the consumers of this amount of food.

On its part Express Travel Co. is claimed to have received Ksh.14 million to supply air tickets

FCMT- A Charleston Travel Ltd is claimed to have been paid Ksh.33 million also for travel services.

Still on transport Toyota Kenya is alleged to have been paid Ksh.77 million for the supply of motor vehicles.

CMC Di Ravenna Kenya has also been pointed top on the list of the companies allegedly having received Ksh.100.6 millionfor services yet to be determined.

According to DCI, Files Steel Structures Ltd was allegedly paid Ksh.8 million for the supply of construction material.

Sanlam Insurance Co. is said to have received Ksh.47 million to provide a cover for the dams.

Another Ksh.19.4 million is claimed to have gone to Highland Valuers for land valuation and relocation services, this despite the fact that the land in both sites are still occupied by locals.

Individuals are also being probed in the dams scandal are; One Vipul Kumar Patel who is alleged to have received Ksh.2.9 million of the money for unknown services.

On his part Joseph Kipkosgey is claimed to have received Ksh.6.5 million while Paul Kosgey Maiyo allegedly got Ksh.4.7 million for services yet to be established by the detectives.

Treasury CS Henry Rotich is expected before the investigators on Thursday February 28, 2019 to shed light on the circumstances under which public funds were released in what investigators have termed a hurry before due diligence was conducted.