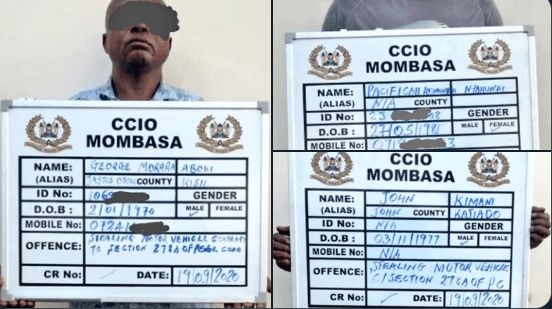 Three members believed to be part of a criminal syndicate that has been stealing cars from car-hire companies in the coastal region have been arrested.

The Directorate of Criminal Investigations (DCI) said in a statement on Sunday that the three were arrested in Kilifi and Kajiado by Mombasa-based sleuths.

The intelligence-led operation led to the arrest of 42-year-old John Kimani and Pacificah Kemunto Nyakundi aged 39.

They are believed to be accomplices of the 50-year-old George Morara.

The criminals are said to have been posing as genuine customers before stealing cars from car hire companies.

A Toyota Axio that was stolen two months ago was recovered in Tanzania through the Namanga border during the operation.

Three members of a criminal syndicate operating in the Coastal region that has been stealing hired cars after posing as genuine customers were yesterday arrested in Kilifi & Kajiado by Mombasa- based @DCI_Kenya detectives, & a Toyota Axio that was stolen two months ago recovered. pic.twitter.com/h2T7vE1bqi