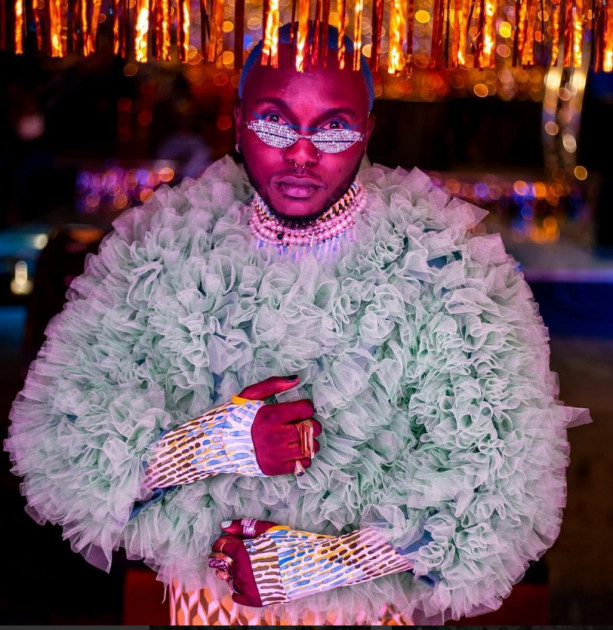 'If you know, I guess you know, Every colour on mind gonna let it out tonight,' Sauti Sol's Austin Chimano sings in his latest Solo 'Its a Friday Feeling', appearing to allude, though subtly, to the rainbow colors of the LGBTQ community.

In the video, Chimano wore a full face of make-up, and donned a fabulous fur coat which he  later swapped with a houndstooth jumpsuit and some futuristic eye-wear, for good measures.

Among those featured in his video are Actress Dennis Karari, BOLD Networks Makena Njeri, Model choreographer Letoya Johnstone, and interior designer Max Richiedei, all who are part of the Kenyan LGBTQ community, as well as dance choreographer Chiki Kuruka who considers herself an ally of the community.

In a follow-up interview with Mpasho, Chimano has let the cat out of the bag, saying that in 2021, a year that he describes as 'the coming of age' people should accommodate other people's truths and beliefs.

Chimano says the 'Friday Feeling' jam is a expression of self identity and the LGBTQ community that he belongs to.

“Friday feeling represents the ballroom culture the LGBTQ community, it’s a representation of ballroom culture within the queer community, which I am part of, so that’s just my first expression of who exactly I am, I am laying everything bare from now on hakuna kujificha jificha anymore, let’s do it, it's 2021, come on.”

He goes on to speak about his soon-to-be released album, ' Heavy is the crown' which he says is based on whom he really is, and the identity that is heavy to carry around.

The singer and  fashionista says everything will be clear as day when the album is released.

“The crown is heavy because its my expression, it’s the first time I’m really expressing myself in song, now you really get to know who Chimano is, and that is a heavy crown to carry, but once you see the whole project you will understand.” He told Mpasho.

He also seized the moment to send a message to his critics, saying that sexuality should not really be a topic of discussion, urging focus instead, on his creativity and how he lives his truth.

According to Chimano, life is too short to worry about what other people are doing, he believes that people should not impose their beliefs on others.

“Because I’m ready, that’s all, it’s not about sexuality because that doesn’t define you, but it’s about my creativity and living my own truth…and everybody better live their own truth and stop deciding what other people’s truths should be, that’s all, do you, figure out your own happiness most especially within yourself," Chimano says

"Life is too short to be preoccupied with what other people are doing. Don’t impose your beliefs and don’t infringe on other people’s human rights…”