Too many players wanted to be ‘the saviour’ – Wenger 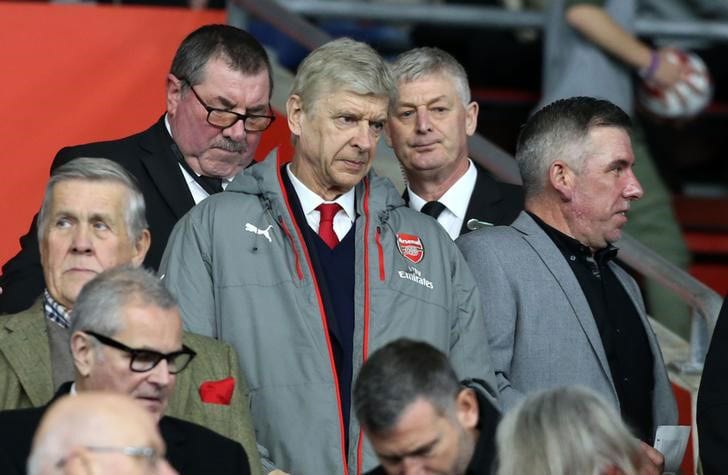 Arsenal manager Arsene Wenger believes his players’ failure to stick to the gameplan was their downfall, as the Gunners suffered a surprising 2-1 defeat at home to Watford on Tuesday.

The Frenchman was serving the second match of a four-game touchline ban but refused to blame their loss on his absence from the dugout, saying he had no regrets in how he set his side up to face the Hornets.

“Well I believe in that period we lost a bit of patience in our buildup and exaggerated a little bit in the individual game.

“Every time we passed the ball quickly we created dangerous situations, I feel we wanted too much to be ‘the saviour’ and didn’t stick to our game in that period. On top of that they gained time intelligently. It’s the usual thing you see when a team tries to protect a score, a result, interrupts the flow of the game.

“You cannot let every shot in as well! We hit the bar, he made fantastic saves as well, Gomes, so I still think if you look at the chances we were unlucky to lose the game,” Wenger said in his post-match press conference.

“We want to respond and win the game of course. But we have first to analyse why we didn’t start well. We had some situations in our team that at the start of the game were not completely clear, we have to analyse that well, and win the next one,” the Arsenal boss added.

Nevertheless, Wenger believes his side were unlucky not to collect at least a point, and has demanded an instant response as they prepare to face leaders Chelsea on Saturday.

“We play at home, we have a great opportunity, we have a start like we did of course it’s very frustrating, the players have to learn from that and respond very quickly and very well in a very convincing way,” Wenger underscored.

He remained coy on whether his touchline ban was affecting the team.

“I don’t know, it;s very difficult to know, that would be an easy excuse, we prepared the game well, we were warned that Watford would come and make it very physical. I have no basic regret in the way we prepared.

“Did we think subconsciously that is okay we will turn up and it will work’, I don’t know, from the stand I agree with you that our first half was not at the level we wanted.

“I don’t think we have a physical power problem, we were not mentally prepared, we were not mentally ready to deal with the duels we usually do. You do not make 47 points in the Premier League after 23 games if you have no physical power. But you have to switch it on 100 percent of the time in the Premier League, that’s what it’s about,” Wenger stressed.