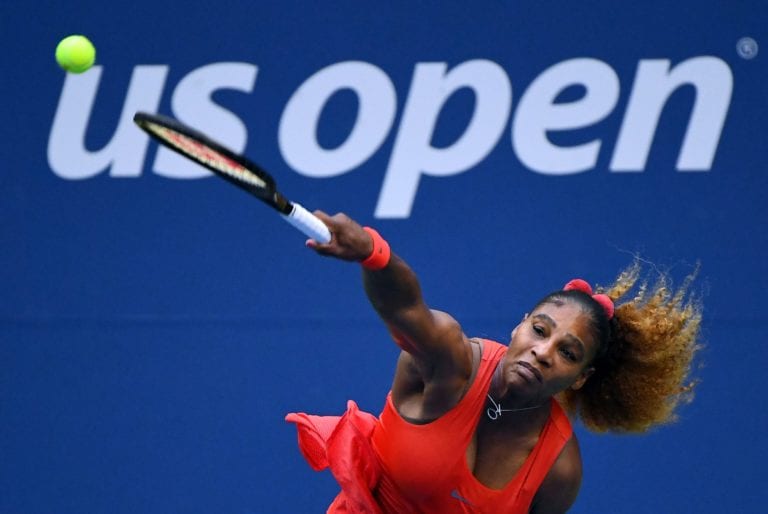 Serena Williams saw the 1,000th match of her illustrious career end in a straight-set defeat by Argentina’s Nadia Podoroska at the Italian Open.

Podoroska looked assured in her first meeting with the 23-time Grand Slam champion as she reached the last 16.

Japanese world number two Osaka lost 7-6 (7-2) 6-2 to American Jessica Pegula in a blow to her preparations for the French Open, which starts on 30 May.

Meanwhile, Halep’s participation in the clay-court Grand Slam – which she won in 2018 – is in the balance after a scan showed she has a tear in her left calf.

The Romanian world number three had to be helped off court because of the injury that forced her to retire against Germany’s Angelique Kerber.

Halep, leading 6-1 3-3 when she had to stop, was wincing in pain and looked close to tears as she hobbled back to her chair.

“I will get an MRI tomorrow to understand the injury in more detail, but at the moment we are unsure of recovery time,” the two-time Grand Slam champion tweeted on Wednesday evening.

It was, however, a more straightforward day for Australian world number one Ashleigh Barty, who reached the third round by beating Kazakhstan’s Yaroslava Shvedova 6-4 6-1.

Williams has work to do before Roland Garros

On a day where nine of the women’s top 10 were playing in Rome, most of the attention was focused on the return of Williams to match action.

The American’s last appearance came in the Australian Open semi-final defeat by Osaka on 18 February.

Being pitted against 44th-ranked Podoroska, who surprisingly reached the Roland Garros semi-finals last year, looked to be far from ideal in her bid to spend time on court in the Italian capital this week.

Eighth seed Williams lacked intensity and struggled on first serve throughout the match, landing just 48% of them, and was unable to take any of the three break opportunities which came her way.

Podoroska initially struggled to close out the match as Williams wiped out the Argentine’s 5-2 lead for 5-5 in the second set, before Podoroska regained her composure to beat a top-10 opponent for the third time in her career.

Williams is not scheduled to play again before the French Open starts but she hinted after this defeat that she could now look to add a tournament to her schedule.

“It was definitely kind of good to go the distance and to try to be out there, but clearly I can do legions better,” she told a news conference.

“Maybe I do need a few more matches, so I’m going to try to figure that out with my coach and my team and see what we would like to do.

“I have been training for months, but it feels definitely different on clay to make that last adjustment.”