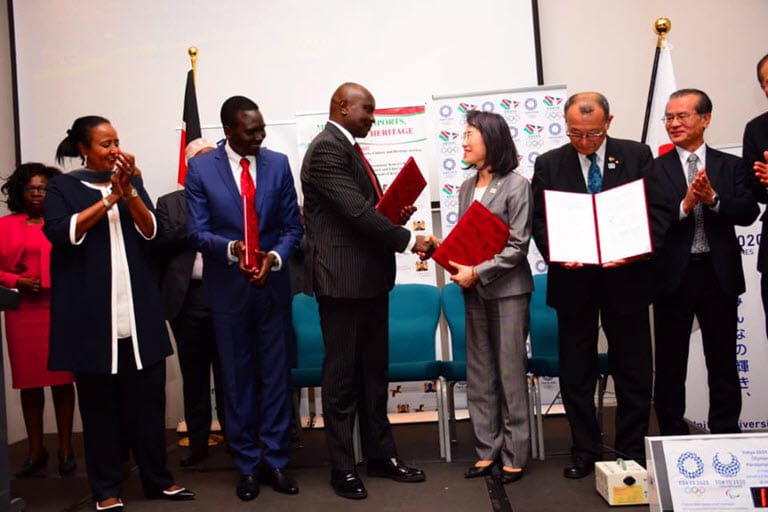 Kenyan athletes will hold a three-week training camp in the Japanese City of Kurume prior to the Olympic Games slated for Tokyo in July 24-August 9.

The negotiations for the programme started in 2017 and after a series of engagements between the National Olympic Committee of Kenya (NOC-K) and officials from the City, a Memorandum of Understanding (MOU) was signed on Thursday at a Nairobi hotel.

According to the NOCK president Paul Tergat, the Kenyan contingent will be accorded a fully catered 21-day training camp at the City before they depart to Tokyo.

“Our partnership with Kurume City has got no monetary attachment to us but they will cater fully for our athletes at the period of the training in the city including accommodation and even transport to Tokyo from Kurume,” said Tergat.

Tergat revealed that the partnership is informed by the need to have the best preparations ever for team Kenya ahead of the Summer Games.

“We need to make sure that as a country we give our sportsmen the best possible preparations especially now that we will be having the largest contingent ever for the Games,” noted the NOC-K boss.

The singing of the agreement was conducted by Tergat alongside Ministry of Sports Principal Secretary Joe Okudo and Deputy Mayor of Kurume City Toshitaka Nakasima as well as the Deputy Governor of Fukuoka Prefecture Akie Omogara.

NOCK Acting Secretary General Francis Mutuku disclosed that although they had a wide range of offers from other cities, they settled on Kurume City which is located at the Fukuoka Prefecture owing to similar climatic conditions with Tokyo.

Amina said although the deal is geared towards preparing team Kenya for Olympics, the partnership between the two countries will grow beyond sports.

“This partnership will open additional cooperation between the two countries from tourism to sports. It will also provide our athletes with modern training facilities,” said Amina.

On his part, Nakasima who was representing the mayor of Kurume said they are ready to welcome Kenyan athletes in the city.

“We are honoured to have a Kenya settle for our city for the pre-Olympic training ahead of the Olympic Games. We would love to be associated with Kenya’s success in sports and therefore we will ensure that we help Kenyan athletes to settle in Japan,” said Nakasima.

National rugby sevens teams (men and women), national women’s volleyball team Malkia Strikers as well as marathon teams are among the teams that have already secured tickets at the global event.