In the lush green gardens of Eliud Kipchoge’s training retreat in the Kenyan highlands, the greatest distance runner of all time is describing the dusty beginnings to his sparkling career.

Growing up, running for Kipchoge was functional. Schoolchildren in Kenya often run long distances without thinking anything about it, and he would run to school and back every day, also repeating the journey at lunch.

“You don’t know you are running because it is a must,” says Kipchoge.

But in 2002 at the age of 18 his life was changed forever when his now-coach Patrick Sang offered him a training plan to channel his obvious talent. The only problem? He didn’t have a pen.

“I just got a stick and wrote the plan for 10 days down on my arm,” Kipchoge says. “Then I just crammed it in my head, rushed home and got a pen and paper to write down what he had told me while it was fresh in my mind.”

Eighteen years later, Kipchoge – now 35 and a multi-millionaire thanks to his incredible athletic success, the first person to run the marathon distance in under two hours – has unsurprisingly long since replaced the stick and arm method with a training journal.

But many things have remained the same. The life Kipchoge lives is a simple one, as free from distractions as possible. The setting is the remote Kenyan village of Kaptagat.

The first thing that strikes you is the quiet.

It’s taken a 24-hour journey from the UK, with three plane rides and multiple taxis, to reach Kipchoge’s camp. We’re a long way from the hustle and bustle of city life.

The bright orange dust roads that surround the camp are bumpy and rutted. But inside the gates, the grass is lush, green and smooth. A host of people mill around – at any given time up to 30 athletes live and train here – but the atmosphere is slow and tranquil.

If it weren’t for the rows and rows of £200 Nike Vaporfly shoes on racks outside the two dormitories (one for men, one for women) you could be forgiven for thinking you were in a Buddhist retreat.

Kipchoge’s weekly routine is certainly monastic. From Monday to Saturday every week, running is a religion. Despite his wife and three children being only a short drive away in the family home, Kipchoge chooses to spend the week in a basic room in the dormitories here. There is one nod to his celebrity status – he has his own room while everyone else shares. But other than that life is spartan.

“Our life here is simple, very simple,” he says. “Get up in the morning, go for a run, come back. If it is a day for cleaning, we do the cleaning, or we just relax. Then go for lunch, massage, the 4 o’clock run, evening tea, relax, go to sleep. As simple as that.”

Kaptagat has performance benefits in terms of its altitude. It is 8,000 feet above sea level. But the back-to-basics attitude is its real secret weapon.

When Sang set it up in 2002, it was expected to serve as a base for juniors and up-and-coming athletes – not become the permanent home for the greatest marathon runner of all time.

“It was in our mind that when somebody was established they would live outside, but then athletes said no, we want to stay,” Valentijn Trouw – Kipchoge’s long-time manager and confidant – has said.

A week’s stay at camp Kipchoge is formulaic. The training diary is set in stone – two sessions a day, the most of important of which come on Tuesdays (track), Thursdays (long run) and Saturdays (interval training). The second session of the day is the afternoon 10km run. It is known as a recovery run. It certainly didn’t feel that way to me when I was invited along one afternoon.

A camp cook prepares the daily meals, which have a similarly rigid structure. Dinner, for example, is always at 7.30pm. And it always features ugali, the ubiquitous Kenyan maize flour porridge dish. The kitchen is tiny and basic, one stove with two hobs.

There is meat slow-cooking in a battered pot when I put my head around the door. Adjacent is an equally basic dining room which has a bedraggled poster on the walls with the quote: “The journey of a thousand miles begins with one step.”

It feels like a low-budget hostel. But as Geoffrey Kamworor, the half-marathon world record-holder who lives and trains alongside Kipchoge, explains, its minimalism is its allure.

“I think being in the camp is something good for us,” he says. “We are away from our families so that brings one focus. It is only running.

“We value running as like our office. It’s something we have to take care of, work for, have passion for and respect for.”

That respect extends to the camp at large. They have a president, voted for by the 30 residents, and elect subcommittees to make key community decisions. “I don’t think he has actually,” is coach Sang’s jovial response when asked whether Kipchoge has ever served as president.

Regardless, for everybody here, Kipchoge is the undisputed “boss man”, even if he winces when asked about the nickname.

“They call me it but I always discourage them,” he says. “When you become a boss, you don’t think straight. It’s better to be a leader than a boss. That is why I do my share of the cleaning. That is how to show the way to young people. I am trusting that I am leading them in a good way.”

Kipchoge’s ability to lead by example in competition is obvious.

But spending time in Kaptagat – and in a rare interview with his wife Grace – you get a greater sense of who Kipchoge is away from racing.

He and Grace met through her brother Amos – one of Kipchoge’s best friends. It was his “silent and humble” qualities that attracted her.

“At home he is fun and runs around the house playing with the children but he is always strict on time,” says Grace, who also revealed that the family spend Sundays watching Formula 1 together.

“The children know that. And I also know that. I always keep time. It is very important, especially on Sundays around going to church. It starts at nine. But by 8.30 we leave the house. It is a lot of time because it is only a five-minute drive.” 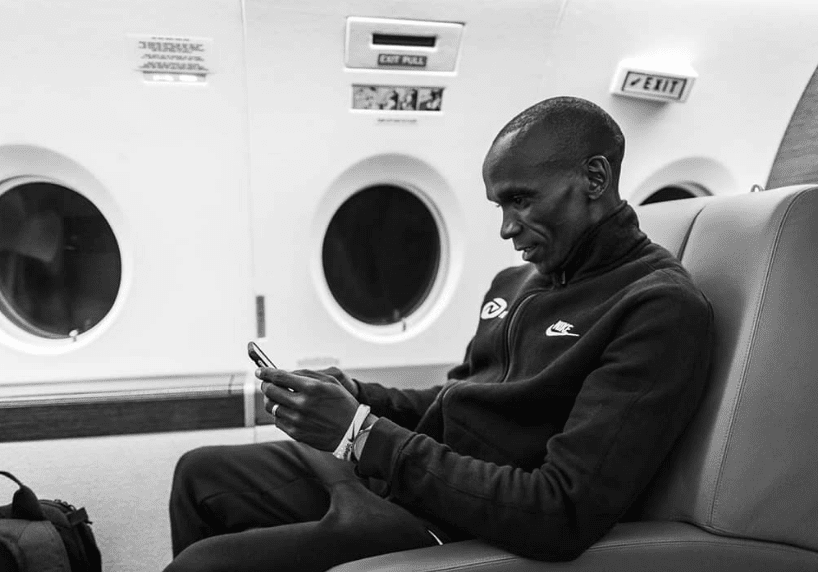 Kenyan athletics has seen a number of stories of highly successful athletes celebrating perhaps a little too much, or getting carried away by fame. Kipchoge is adamant he will never have his head turned.

“I don’t have extra money to actually make my mind go haywire,” says Kipchoge. “I am a human being and I stay as a human being. Money stays away. I’m not working with money; money is in the bank. I want to live a simple life.”

Kipchoge’s idea of a weekend blowout is to go to his small farm where he keeps cows, sheep and chickens. On a visit to Eldoret town, about 25km away, pet shop owner Mike Kiplagat describes his monthly visits to buy animal feed. “He arrives on the back of a motorbike taxi, comes in, makes his purchase and then leaves. He is a legend but is so humble.”

Kipchoge says: “Animals are good for being around, especially after training – you go to animals and you feel relaxed. You can refresh your mind.”

His incredible cardiovascular fitness actually has its origins in farming. As well as running to and from school, the teenage Kipchoge used to earn money by transporting milk on a bike. He would ride a 40km round trip from his family home to a nearby town – collecting and then selling milk from farmers.

These character-building cycling trips immediately come to mind when watching Thursday’s long run – and not just because the distance covered is the same.

It is 5.30am and still nearly pitch black. Kipchoge and the rest of the training group make their way to the camp gates to assemble for the most testing run of the week. Very few words are spoken, but as we approach the gates there is a real buzz in the air.

Despite the fact that the sun is yet to rise, a crowd of at least 50 (and rising) is already waiting by the road. They are not autograph-hunters but budding local athletes, eager to catch the eye by proving they can keep pace with the greatest marathon runner of all time.

Late in 2019 I had breakfast with Kipchoge on the morning of the BBC Sports Personality of the Year Awards. He assembled an incredible plate of food – fried bread, black pudding, eggs, beans, sausage… and croissants for dipping.

“British breakfasts are the best in the world,” he said between mouthfuls.

This morning he is about to take on his longest run of the week having eaten nothing. Watching the session from a minivan trailing behind, coach Sang provides insight from the front seat. “We have had athletes come to the long runs like this who have then been invited to the camp,” he says.

At our first stop to watch the athletes fly by, one runner, in his eagerness to impress, is miles ahead of the main pack. “Look at this madman,” Sang laughs.

Kipchoge’s face is stern, a picture of concentration, when he passes a minute later, as it is throughout the two-hour run. “He has never missed a session. Not one,” says Sang. It’s an incredible statement given the two have worked together for nearly 20 years.

That consistency is arguably Kipchoge’s most remarkable quality. Marathon running is a notoriously tough sport. Injuries are commonplace as the workload is often over 100 miles a week. But it was actually a hamstring problem as a track athlete in 2012 that prompted Kipchoge to switch to marathon running after he failed to qualify for the London Olympics – and he has not had a major injury since. How is that possible?

“Staying fit is really hard,” says physio Peter Nduhiu. “But Eliud makes it easy for me to work on him. If he feels an issue, he will come to me straight away after a run before even going back to his room and we can nip it in the bud. This body that we have, if you treat it well it will treat you well. If you mishandle it, then it will misbehave.”

By the time the athletes return to the camp, the group of around 100 that started the run has been whittled down to five.

Kipchoge, predictably, leads the handful – and the handshakes afterwards. As we walk back to the camp, our conversation again turns to bikes.

After becoming the first man in history to run under two hours in Vienna last October, Kipchoge was given a road bike by Ineos, financial backers behind the sub two-hour marathon event. Since then he has been riding it around the countryside surrounding Eldoret at the weekends.

Typically for Kipchoge, he’s taking it quite seriously. He tells me he has a 300km ride lined up for later in the year. “Under three hours I thought, that will be OK, right?” he says.

Even for Kipchoge, and his catchphrase ‘No human is limited’, I suggest 100km/h on the dirt roads of Eldoret might be a stretch. “Maybe four then,” he concedes.

Kipchoge’s “moon-landing” moment in becoming the first person to run a marathon distance in under two hours is not a world record because, among other things, he used pacemakers who swapped in and out during the event.

On the treatment table the day after running 1:59 in Vienna, Kipchoge said to Nduhiu: “Now, the next thing. Make it official.”