By Gilbert Kiprotich For Citizen Digital 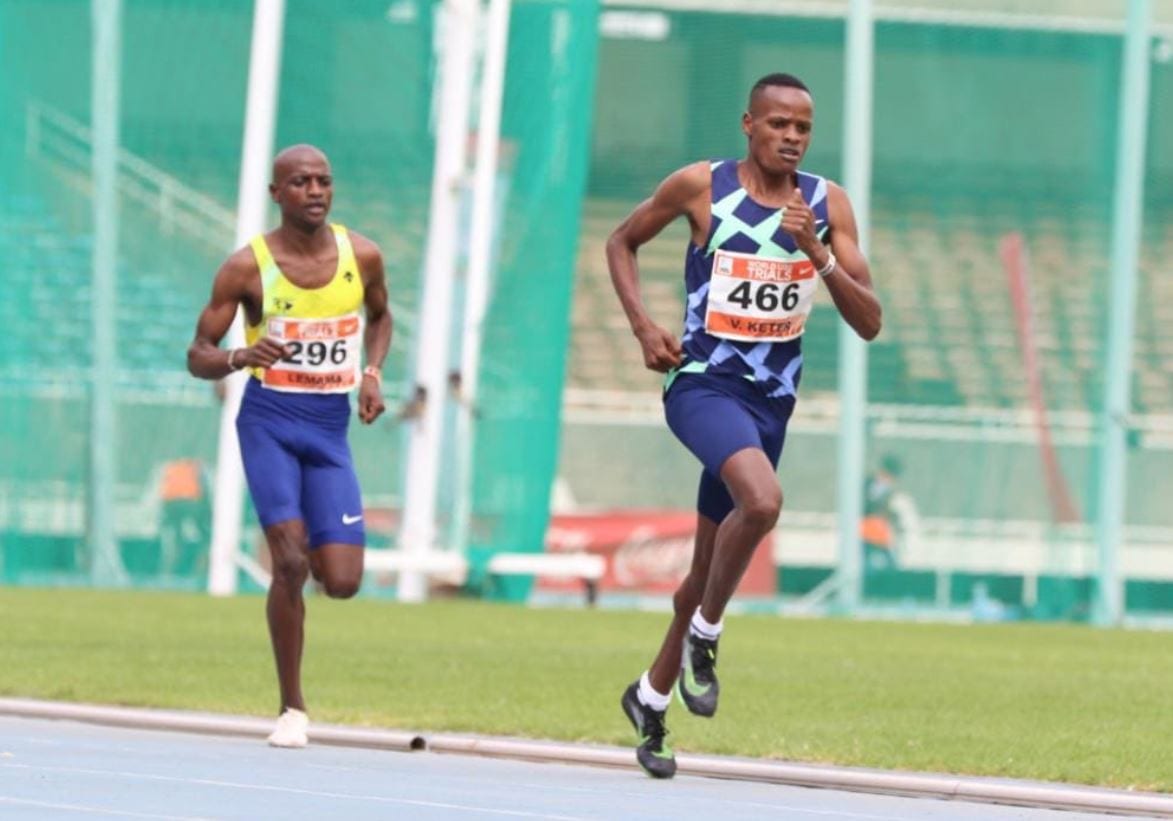 Africa Under-18 1500m champion Vincent Keter and Japan-based Teresia Muthoni are among athletes who secured slots in the finals as the World Under-20 trials kicked off Thursday at the Moi International Sports Centre, Kasarani.

Despite a late downpour at Kasrani, stakes were high as budding athletes took the gloves off with tickets in team Kenya up for grabs in the three-day event that will culminate in the naming of the team on Saturday.

Keter took top honours in his 1500m semi final clash where he clocked 3:42.45 to storm to finals set for Saturday.

After missing out on the Olympic team a fortnight ago, Keter vowed to go all out for a gold medal at the World Junior event set for August 17-22 in Nairobi.

“Today it was a bit tough since you don’t know your opponents especially during the semis. I am now heading to the finals with my target to make the team. My biggest dream is to represent my country once again,” said Keter, who trains alongside world 1500m champion Timothy Cheruiyot at Rongai Athletics Club.

On her part, Muthoni from Central edged the Africa youth 3000m champion Zena Jemutai from North Rift to win the women’s 3000m in 8:56.29 as Jemutai clocked 9:01.67 to settle for the runners up spot.

“I had focused on winning, that is why throughout the race I was keen to maintain my pace. As I prepare for Saturday, I intend to do more than this and seal a place in the national team,” she said.

On her part, Jemutai said her target is to make the cut on Saturday as she eyes her second appearance at the global event after she placed fifth at the last edition of the championships held in Tampere, Finland.

Emmanuel Kiplagat and Levi Kibet both from Central Rift were the winners in their respective semi finals of the men’s 5000m.

“I had prepared well and was certain I would win today. As we head to the finals on Saturday I am optimistic I will get a chance in the team,” said Kibet, who is a student at AIC Kosirai Secondary School.

“I am hopeful I will emerge victorious on Saturday so that I can represent my country. In the finals I am hoping to improve on my speed so that I can run a bit faster than today,”said Chepkirui.

Zeddy Chesire from Central Rift managed an impressive 1.68m in the women’s high jump to make the cut despite falling short on the qualification mark of 1.82m.

“I am happy with my performance. It is my prayer to participate at the World Under-20 Championships.  Having represented Kenya twice at the East African School Games in 2018 and 2019, I am happy to make the national team,” said Chesire, an alumnus of AIC Cheptonon Secondary School.

Athletics Kenya (AK) Director for Youth and Development Barnaba Korir said Kenya being the host nation was handed the latitude to enter athletes in disciplines despite falling short of the qualifying standards.

“We will pick those who have come close to meeting the qualification standards especially in the events that we have been struggling with like the sprints and field events,” Korir said.

“My target was to hit the 2.07m mark, but I was pleased with what I achieved today,” said the sprinter-turned high jumper.

Action continues on Friday with some finals lined up in 10km walk, long jump, shot put and 400m hurdles for men and women as well as the women’s 5000m race.