By Stanley Mativo For Citizen Digital 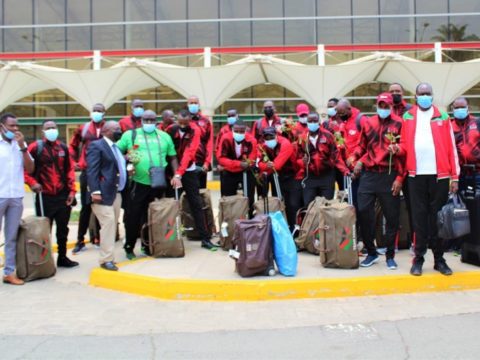 The national men’s volleyball team Wafalme jetted back from Kigali on Thursday after the conclusion of the Men’s African Nations Volleyball Championships which were held in the Rwandan capital.

Kenya defeated Mali 3-0 on Tuesday night to finish ninth in this year’s edition which attracted a record 16 teams, and head coach Gideon Tarus wants more attention and resources for the squad.

“We’re waiting now to see what next from the federation but I don’t want a situation where I only interact with the players from days to championships, we need to get the resources and play international friendly matches so as to continue building this squad.

“We competed against countries which have invested heavily on the men’s teams and our fortunes did not change because we’ve not given Wafalme more attention they deserve although there was an improvement in Rwanda,” he said after the team landed in Nairobi.

They defeated Egypt 3-2 in a historic win before losing 3-1 to Morocco in their second preliminary match.

The East Africans would later earn a walkover against Tanzania who were disqualified from the event after failing to pay participation fee, but that was not enough to send them to the quarter finals after Morocco failed to defeat Egypt.

Meanwhile champions Tunisia and Cameroon booked tickets to the next year’s World Championships to be hosted in Russia after they finished first and second respectively.