IN PICTURES: How the Athletics Kenya Golden Gala Night went down 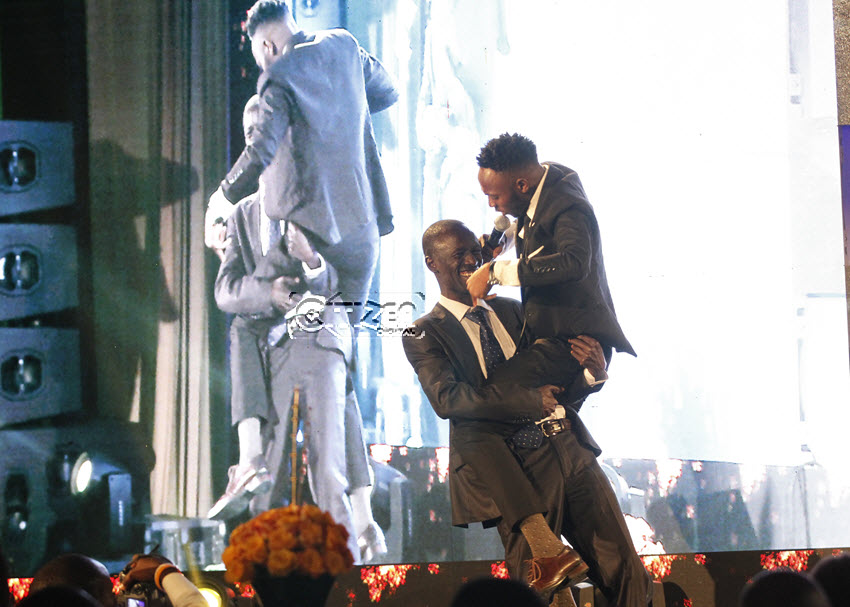 Ezekiel Kemboi and comedian David The Student put on a show at the Gala Night. [Photo/sportpicha.com]

Yego broke the national record four times and African record twice besides setting a new Diamond league record on his way to the World title, the first Kenyan to ever win a world title in the field event.

The 26-year-old launched his season with victory at the IAAF Challenge in Ostrava with a national record throw of 86.88, finished second at Roma Diamond league with an improved performance of 87.71m before claiming his maiden Diamond League victory in Birmingham with a record breaking 91.39m.

He would then go for the World title in Beijing in a massive throw of 92.72m that counted for the new African record, and the third all-time best throw.

Earlier, the ‘You Tube Man’ walked the stage to accept the Field Athlete of the Year trophy for the men with no female athlete deemed to be worthy of recognition in the corresponding class.

Cheruiyoit commonly referred to as ‘Pocket Rocket’ made a great return from maternity break to reclaim her World 10,000m title for her fourth world gold.

The 2013 male athlete of the year David Lekuta Rudisha got a consolation with the comeback award for returning from an injury that made him not to defend his world 800m title in 2013 from an injury only to reclaim it in Beijing.

Athlete of the Year

Young Athlete of the Year

Sprinter of the Year

Middle Distance of the Year
Male

Long Distance of the Year
Male

Field Athlete of the Year

Outstanding Performance of the Year

Comeback Performance of the Year