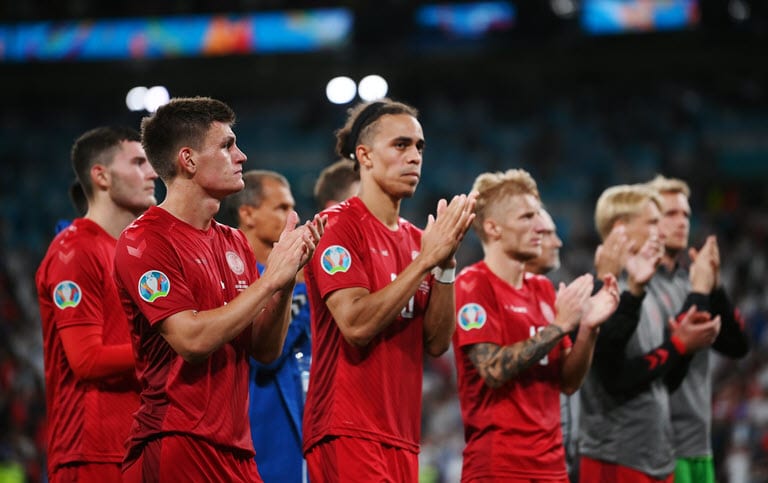 With their Euro 2020 campaign looking over by halftime in the opening game after Christian Eriksen’s collapse, Denmark somehow came blazing back to reach the semi-finals, only to finally run out of steam as they lost to England after extra time.

The closest most of the Danish players had been to such tragedy and drama was most likely the statue of Hamlet at the entrance of their hotel base in Helsingor, but Eriksen’s cardiac arrest against Finland thrust them into the global spotlight.

The shocking scenes that unfolded on live television stunned the footballing world as medics battled to save the life of their talismanic midfielder while his distressed team mates looked on.

Captain Simon Kjaer showed great strength to help save Eriksen’s life as keeper Kasper Schmeichel tried to pull his side together, while others wept before the dubious decision to restart the game against Finland was taken.

It resulted in a 1-0 loss that not even the Finns seemed to care much about, despite it being their first game at the finals of a major tournament.

In the aftermath of that trauma, Denmark coach Kasper Hjulmand spoke of how the Danes needed to have the courage to allow themselves to experience their feelings, and he and his players displayed a range of raw emotions in the following days.

Some, like Schmeichel, seemed to recover quicker than others but Kjaer, the rock on which the current Denmark side is built, was not sure he wanted to play the next game against Belgium, a 2-1 loss that came as no surprise. 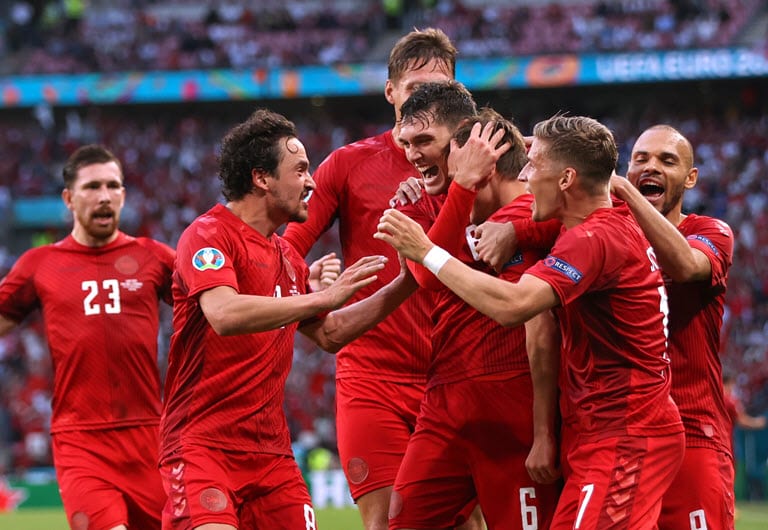 Denmark’s campaign was in turmoil, but having shown glimpses of Hjulmand’s expansive, ambitious football, the signs of a potential comeback were there once they managed to gradually put the shock of that opening game behind them.

Mikkel Damsgaard led the way, showing no fear whatsoever as he shouldered Eriksen’s playmaking responsibilities and scored a brilliant opening goal against Russia in their final group game to ignite a cathartic night in Copenhagen.

Battered beyond belief, but knowing that Eriksen was alive, the Danes simply refused to throw in the towel as 25,000 red-and-white clad fans roared them on to a spectacular 4-1 win that saw them qualify as one of the best third-placed teams.

They walloped Wales 4-0 in the last 16 as the headlines finally turned to their football, rather than Eriksen’s fate.

A nervy 2-1 win over the Czech Republic in the quarters set up the semi-final clash with England. They even took the lead through another brilliant Damsgaard goal, but the cracks were beginning to show.

A Kjaer own goal levelled the game and by the hour mark they began to wilt, the adrenalin fading and the emotional toll of the last few weeks making its presence felt as an extra-time penalty by Harry Kane ended their tournament.

Showing bravery and skill, there was no shame in that defeat as the Danes weathered the storm of Eriksen’s collapse, winning new fans at home and abroad and auguring a bright and promising future, despite the drama they had to endure at Euro 2020.