Euro 2020: Denmark’s journey through the eyes of the country

By Isaac Swila For Citizen Digital

In the space of barely two weeks, Denmark have experienced “emotions of a lifetime” at Euro 2020 – and their rollercoaster ride continues.

Having to cope with seeing Christian Eriksen suffer a cardiac arrest on the pitch, and losing their first two games, the country galvanised and beat Russia in the final group game.

Now the side are riding the crest of a wave and have reached the semi-finals, where they will face in-form England at Wembley.

Denmark supporter Jes Hogsberg Lind has been a season-ticket holder at FC Copenhagen for a number of years and was at his home ground for all three group games.

There was real happiness and excitement before the first Euros game to be hosted in the country, having drinks with friends before heading to the ground, but it soon turned to despair.

Lind was situated in the lower tier of the stand closest to where Eriksen collapsed and witnessed the medics performing CPR, with fans “crying and praying” for his recovery.

“I have been to Parken hundreds of times but I have never heard the stadium that quiet,” Lind tells BBC Sport. “Everybody was in shock, numb and expressionless. I don’t remember anything from the rest of the game. It didn’t matter, it was unimportant.

“A couple of days later I read that Pierre-Emile Hojbjerg had missed a penalty and I totally forgot about that. We saw a man dying on the ground and brought back to life.”

After a two-and-half-hour delay, both sets of players returned to complete the game, which Denmark lost 1-0, as well as being beaten 2-1 by Belgium in the next.

They went on to hammer Russia 4-1 in the final group game before progressing past Wales and the Czech Republic in the knockout stage.

“This heaviness on our shoulders lasted until half-time of the Belgium game,” says Lund. “The players played a tremendous first half and then the bad feeling disappeared and we could talk about football again. We knew Eriksen was OK, breathing and recovering in hospital.

“The atmosphere in the Belgium and Russia games was magical and you could see that everyone was there to support the team. The fans exploded when Mikkel Damsgaard scored the opening goal and we managed to progress.

“The tournament has brought everyone closer together – the players, the coach and the fans are on this journey together.”

‘They have no fear of losing’

Unlike opponents England, Denmark have previously lifted the trophy, in 1992, when they defeated Germany in the final, and supporters are now dreaming of their team emulating that feat.

The Danes did not qualify for that tournament and were given a week’s notice to get a squad prepared after Yugoslavia, in a state of civil war, were not allowed to participate.

“Since the Eriksen incident it has been down and then going up,” Danish journalist Kresten Mosbaek Gravesen told BBC Radio 5 Live. “Emotions of a lifetime between two weeks that have been horrifying and now emphatic in Denmark.

“It has been amazing for us journalists talking to the players, we have stars who play for big clubs – when we talk to them we can chat to them and it sums up the connection between the team and the fans. 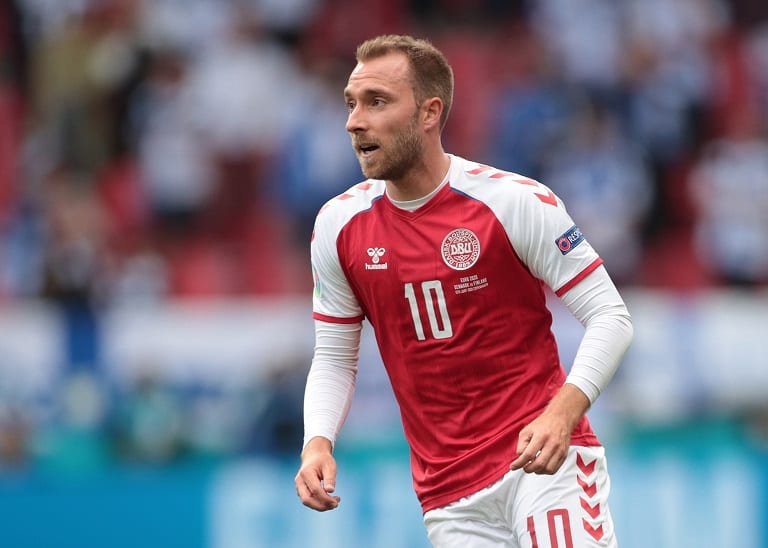 “There are flags in every window and you haven’t seen this since 1992. People say they have united with a nation even more right now.”

Lind added: “People cannot help compare the two because it is the same kind of fairytale.

“You were not supposed to be there or something bad has happened, so everybody turns around and gets the best out of each other. This team, football-wise, is better than the one from 1992.”

‘Love and compassion has given the team wings’

Kasper Hjulmand took over as Denmark boss in July 2020, replacing Aga Hareide, who is credited with laying the foundations of the team’s success.

Hjulmand is a popular and well-respected figure with the national side, for his connection with the fans, the brand of football he plays and the way in which he handled the Eriksen incident.

“The unity is very strong,” he says. “It is not made by what happened to Christian. But in that second when time was standing still, when we were all very vulnerable, we saw life can be taken away so quickly.”

Eriksen was admitted to hospital after collapsing on the pitch against Finland but was discharged just six days later having been fitted with a heart-starting device.

He visited the team before returning home with his family.

Hjulmand added: “We are carrying Eriksen all the way. He is with us, he is with me and everyday I think about him. He is the heart of this team and we carry him with us all the way.

“I don’t really believe in fairytales, but I do believe in the character of this team, the love and compassion of the whole Danish population has given this team wings.

“We are playing with the heart of Christian, the heart of the whole population and everyone in Denmark, young, old, in red and white who supports us, we strongly believe in ourselves.”