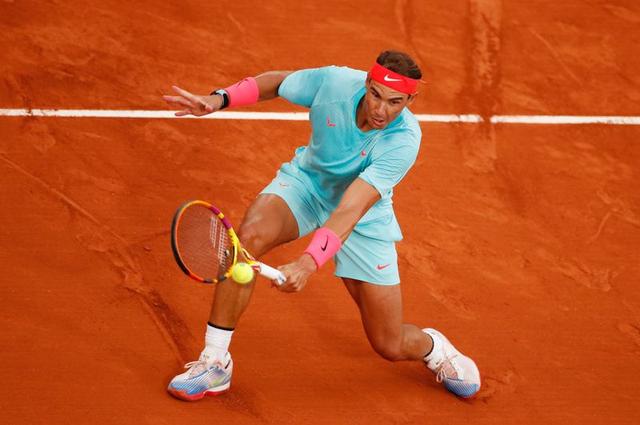 It might be an unusual French Open but claycourt master Rafael Nadal started his quest for a record-extending 13th French Open title in the usual way with a straightforward 6-4 6-4 6-2 first-round win against Belarusian Egor Gerasimov on Monday.

The Spaniard, looking to equal Roger Federer’s record of 20 Grand Slam men’s singles titles, is used to slow starts at Roland Garros and this year’s debut was no different.

On the revamped court Philippe Chatrier, whose roof stayed open throughout, Nadal converted all of his five break points to set up a meeting with American Mackenzie McDonald.

The second seed, who had complained about the new balls being too heavy, did not appear too bothered in front of some 200 fans, wrapping up the match with a service winner.

“It’s a different Roland Garros. Of course we play in the same place. But the conditions are completely different than any other Roland Garros that we’ve played,” said Nadal. The French Open was moved from its usual May-June spot to Sept. 27-Oct. 11 amid the COVID-19 crisis, meaning players have to deal with rough weather conditions – colder, more humid.

Nadal arrived in Paris with no title on clay under his belt after being beaten by Argentine Diego Schwartzmann in the quarter-finals of the Italian Open, but Monday’s match gave him reasons to be optimistic.

“I played quite a solid match when I was serving, no? I was playing some good points. I did some good forehands, winners down the line, that’s a key shot for me,” he said.

“And then I had to play a little bit longer. I played sometimes too short. But in general terms, that’s a normal first match of Roland Garros, no? Coming with the situation that I am coming.”

With the Spaniard’s topspin having less of a devastating effect on the heavier clay, Nadal had to adapt and play more aggressively than usual, taking the ball earlier to unsettle his opponent — a tactic that worked perfectly.

He broke in the fifth game as he bagged the opening set in solid fashion, and he stole his opponent’s serve again in the third game of the second.

With a mountain to climb after falling two sets behind and as blue skies ate away the dark clouds, Gerasimov broke for 2-0 in the third set.

Nadal quickly regained control, however, and levelled for 2-2, with Gerasimov twisting his ankle on the last point of the fourth game.

The physiotherapist taped the Belarusian’s ankle and play resumed after a short interruption with Nadal breaking again for 3-2.

Gerasimov’s challenge was fading as Nadal piled on the pressure to seal a routine win, moving a step closer to a potential semi-final with last year’s runner-up, Austrian third seed Dominic Thiem.