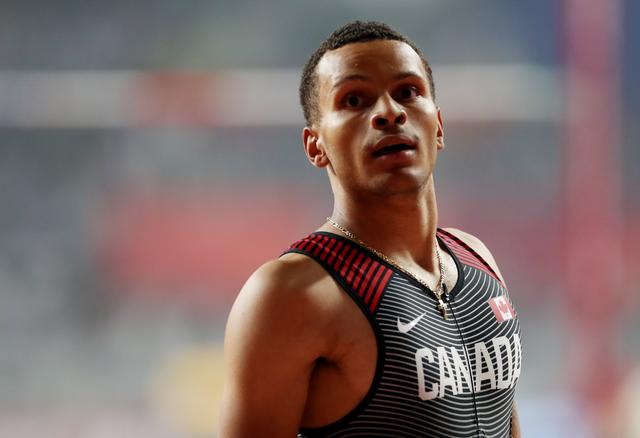 Canada’s Andre De Grasse does not dwell on the injuries that derailed the better part of two seasons but rather remains laser focused on the Tokyo Olympics where a golden opportunity awaits him given the notable absence of retired sprinter Usain Bolt.

This year will mark the first time since the 2004 Athens Games where a male athlete other than world record holder Bolt will become the 100m or 200m Olympic champion.

“The main thing for me is staying injury free,” three-time Olympic medallist De Grasse told Reuters in a video interview. “If I can stay injury free and get to the starting line I know I can accomplish big things.”

De Grasse became a household name after he won bronze in the 100m at the 2016 Rio Games, silver in the 200m and bronze in the 4x100m relay, making him the first Canadian athlete to win Olympic medals in all three sprint events.

He then missed most of the 2017 and 2018 seasons with right hamstring injuries but overcame that stretch of adversity as he won bronze in the 100m and silver in the 200m at the 2019 world championships in Doha.

The long road back from injury, a stretch during which De Grasse said he had to overcome doubters who questioned whether he would ever be the same sprinter, played a role in him joining mental health tech company headversity in May as a resilience ambassador.

Now, with reigning 100m world champion Christian Coleman also absent from Tokyo while he serves a ban for missing three drugs tests in a 12-month period, De Grasse, 26, may have his best shot yet at winning the crown jewel of the Summer Games.

“The last Olympics I felt like I had a good shot at winning gold, this Olympics I feel I have a shot and I’ll probably say the same thing again for the (2024) Olympics. That’s just my mindset,” said De Grasse.

De Grasse, who said he enjoys the bright lights and pressure of the Olympic stage, has been rounding into form ahead of the July 23-Aug. 8 Tokyo Games where he said very little separates all the top competitors.

“We’re all just as fast, we all have around the same personal bests … but it’s really like you have to do it on that exact day,” said De Grasse.

“That’s the hard part, and that’s where a lot of pressure gets to people sometimes where they can’t execute the race that they want to or they are not feeling as good as when they ran that time before.”

Like many other athletes, De Grasse was initially upset when the Tokyo Olympics were postponed due to the COVID-19 pandemic but he ultimately came around and enjoyed the rare mental and physical break it offered him.

While De Grasse works out six days a week hoping to become the next sprint king, he is well aware there are more serious things at stake considering Japan remains under a state of emergency due to the pandemic.

“It’s a little bit scary hearing in the news about what’s going on in Tokyo but I try not to think about it,” said De Grasse.

“I try to keep an open mind and focus on what I can control and just hope the situation can get better by the time that we are ready to get over there.”