Verdict on petitions challenging BBI to be issued on Thursday 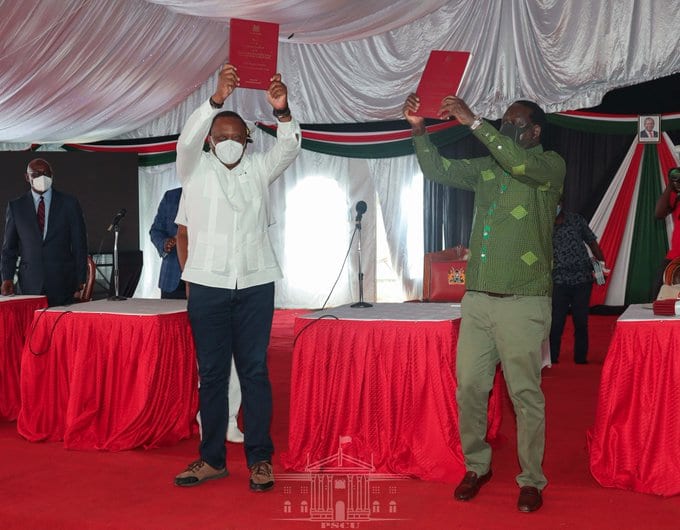 The High Court is set to make a ruling on seven petitions that have challenged the proposed constitutional amendments on Thursday.

The decision on whether Kenya will hold a referendum in July or August- as per the propositions by the BBI proponents now lies in the hands of five judges: Justice Chacha Mwita, Joel Ngugi, George Odunga, Jarius Ngaah and Janet Mulwa.

In March, eight cases challenging the looming BBI referendum were heard on by a five-judge bench that amalgamated the cases into one.

Petitioners who include economist David Ndii, Kenya National Union of Nurses, Thirdway Alliance, 254Hope, Justus Juma and Moraa Omoke had questioned the BBI process to amend the Constitution terming it a dangerous move.

In submissions made by lawyers representing the 8 groups, the five-judge bench was urged to use the court’s unlimited powers to dismiss attempts to amend the Constitution.

According to the petitioners who made their presentation virtually, the public was completely locked out from the amendment of the country’s supreme law.

The anti-BBI crusaders insisted that BBI does not reflect the will of the people.

Even before the Constitution of Kenya (Amendment) Bill 2020 was presented to county assemblies, petitioners faulted the signatures verification exercise by the IEBC saying it was flawed.

The petitioners accused promoters of the bill of using public funds to influence the process to have the country subjected to a referendum yet majority of the clauses can be passed by Parliament.

The petitioners who had the better part of the day to make their case told the five judge bench that the process to amend the Constitution through BBI has not met the constitutional threshold since majority of views were left out during the first and second round of presentations held by the BBI taskforce.

They claimed the BBI process was a one-man show from the onset terming it a presidential project.

“The president is not the constituted power. There’s no doubt an initiative powered by the president can’t be a popular initiative, ” submitted LSK President Nelson Havi.

Meanwhile, the Senate is set to vote for the BBI Bill later this week, after which the speaker will transmit the Senators verdict to President Uhuru Kenyatta, for onward transmission to the electoral body-IEBC.