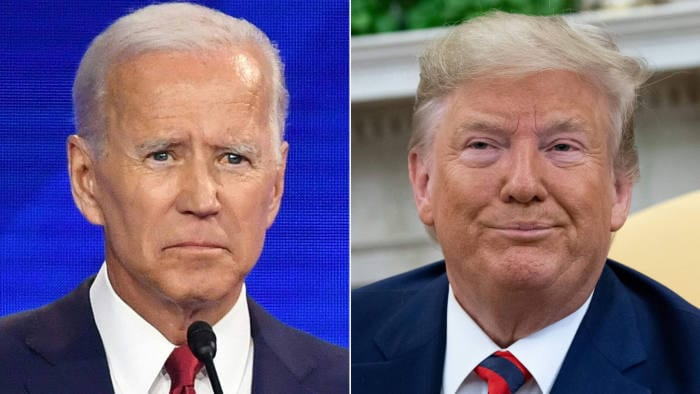 Joe Biden has spent these early days as President-elect pleading with Americans to pay attention to the relentless surge of Covid-19 — with deaths averaging more than 1,000 a day in the past week — as President Donald Trump continues to ignore the deepening crisis and touts the promises of yet-to-be-approved vaccines as his panacea.

The continuing power struggle between two men with diametrically different philosophies on how the US should handle the virus has left the nation rudderless at this critical moment — forced by Trump into a governing crisis as he refuses to let the transition to the Biden presidency proceed and pass on knowledge that could be critical to slowing the spread of the virus next year.

This past week, some Republicans in Congress finally seemed to take note of how the President’s blockade was threatening national security — as Republican Sens. James Lankford of Oklahoma, Chuck Grassley of Iowa and Senate Majority Whip John Thune of South Dakota, among others, stepped up to say that the President-elect should begin receiving intelligence briefings as is customary during the transition of power.

But there is no indication that top GOP leaders are applying that same logic to the deadly increase in coronavirus cases, even though the number of patients in US hospitals hit an all time pandemic high last week, according to data from the Covid Tracking Project. As of Saturday, more than 69,000 Americans were hospitalized, according to the organization’s tallies.

The President is still adhering to the same hands-off approach that led so many voters to reject his leadership on Election Day, inaccurately stating that the increase in cases is the result of increased testing as he tries to focus public attention on his administration’s efforts to speed up a vaccine through Operation Warp Speed.

The President spent most of Saturday golfing and tweeting his baseless and debunked conspiracy theories about how the election was rigged, and driving by a crowd of his supporters who gathered in Washington to protest the election results on the basis of his lies and propaganda.

He barely addressed the virus on Twitter Saturday, tweeting: “Congress must now do a Covid Relief Bill. Needs Democrats support. Make it big and focused. Get it done!”

Amid that leadership vacuum, many doctors and top medical experts are bracing for even greater holiday spikes, noting that Americans have simply let their guards down and given in to the desire to return to normal life. The President unquestionably played a role in those attitudes as the administration abandoned its coronavirus task force briefings months ago and he tried to win reelection by advancing the falsehood that the US was “rounding the corner.”

Given the complexities of rapid vaccine distribution and the potential for catastrophic consequences if doctors, hospitals and first responders don’t have what they need to handle the current rise in Covid-19 cases, Democrats — and even some Republicans from past administrations — are sounding the alarm about the need for more communication between the outgoing and incoming administrations in this grave moment of national crisis.

Trump is blocking any meaningful exchange of coronavirus information — beginning with the refusal of his appointee at the General Services Administration to ascertain the election, the first step that would allow the flow of transition funds and streamlined background checks for incoming staff.

That’s forced the Biden team to get up to speed on the pandemic response by back-channeling with governors, members of the private sector and the medical community as they try to shape the nation’s coronavirus response plan for next year.

While Biden is publicly projecting calm about the governing crisis — allowing the Trump campaign’s election challenges to work their way through the courts, where they are amassing a growing string of defeats — he called for “urgent action” Friday by the Trump administration, including an acknowledgment of how serious the current Covid-19 situation is.

“This crisis demands a robust and immediate federal response, which has been woefully lacking. I am the president-elect, but I will not be president until next year,” Biden said, underscoring the limitations of his position. “The crisis does not respect dates on the calendar, it is accelerating right now…. Right now is a moment for shared responsibility and shared action. Together, we have the power to rein in this virus. And I promise you, from the moment I am sworn in on January 20, I will do everything in my power to lead this unified national effort.”

The President-elect’s advisers have been increasingly vocal about their concerns about the lack of information sharing between the current and future administrations.

“This is truly a national security threat,” Dr. Celine Gounder, an infectious diseases specialist, epidemiologist and Biden Transition Covid-19 board member, said on CNN’s “Anderson Cooper 360” Friday evening. “I cannot even imagine another situation — if we were in the midst of a war — that you wouldn’t have handoff of information and plans to a succeeding president.”

As the US smashed through another set of coronavirus records on Friday evening, Dr. Vivek Murthy, co-chair of Biden’s transition coronavirus advisory board, told Blitzer it was “a grim day for the country.”

“We’re at a point now, even pre-Thanksgiving, where we are surging beyond any level that we have seen over the last eight months,” Murthy, a former surgeon general under President Barack Obama, said on “The Situation Room.” “What we do over these next few weeks is going to have a profound impact on whether this spread increases or whether we ultimately control the spread of this virus.”

In the absence of a vigorous federal response, local leaders are once again considering more dramatic action to control the spread, which could create major economic and logistical disruptions.

The 2.4% test positivity rate in New York City is now close enough to the 3% threshold that could lead the city to close schools and transition students to remote learning, a possibility that New York Gov. Andrew Cuomo discussed during a call with journalists Saturday where he added that some schools might be able to “test out” of closures if they have a much lower positivity rate than the surrounding area.

The resurgence in Oregon, where cases topped more than 1,000 a day for the third day in a row Saturday, led Gov. Kate Brown to announce a “two week freeze” on Friday that will limit social gatherings to six people and two households, close restaurants and bars and place new limits on the number of people who can gather within faith-based organizations. The freeze will span from November 18 to December 2.

“I know it’s hard and I know everybody is weary but we are trying to stop this ferocious virus from spreading,” Brown said.

In Los Angeles, where cases have surged from about a 1,000 a day three weeks ago to nearly 4,000 on Saturday, according Mayor Eric Garcetti, officials created the largest testing center in America at Dodger Stadium — ushering some 8,000 people through the testing regimen on a single day this past week.

On Saturday, the Navajo Nation ordered a new three-week stay-at-home lockdown, restricting travel and only allowing residents to leave their homes for emergencies or to pick up groceries, medicine and firewood.

“We are inching closer and closer to a major public health crisis in which we could potentially see our hospitals filling up with patients,” Navajo Nation President Jonathan Nez said in a statement. “Our health care system on the Navajo Nation cannot sustain a long-term surge in Covid-19 cases. The safest place to be is at home.”