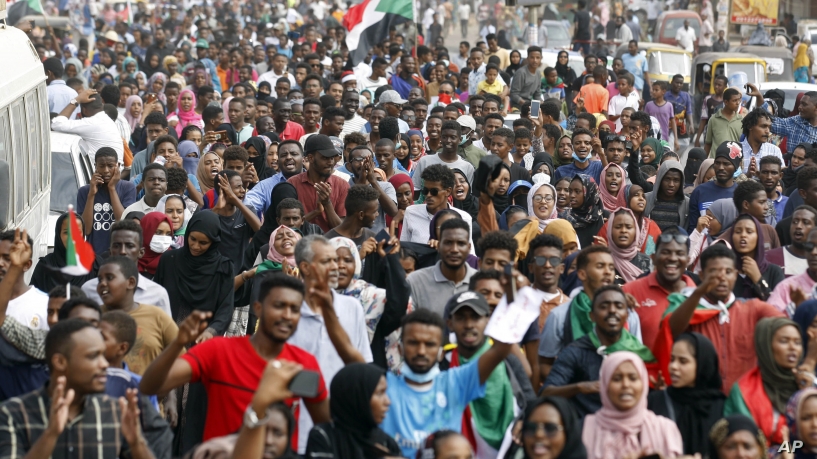 Tens of thousands of people marched in Khartoum and other Sudanese cities on Thursday to demand justice for those killed in recent protests.

Sudan’s ruling Transitional Military Council acknowledged that its Rapid Support Forces were involved in the shooting deaths of six people in the city of El Obeid earlier this week.

vDespite the tension, talks on forming a transitional government are going ahead.

The protesters marched in Khartoum to pressure the ruling Transitional Military Council to punish the troops accused of killing four students and two adults in El Obeid.

The shootings took place Monday as students rallied against shortages of electricity and fuel.

On Monday, the TMC said the Rapid Support Forces weren’t responsible for the killings. The council blamed “shadow troops” still loyal to the government of ousted President Omar al-Bashir, whom it said want to create instability.

On Thursday, however, the council reversed course, and said seven Rapid Support Forces have been arrested for the shootings in El Obeid and will be put on trial soon.

Amjad Farid is a spokesman for Sudan’s opposition umbrella group, the Sudanese Professionals Association, or SPA. Farid said the proposed transitional government to be formed by the TMC and opposition must still investigate the killings.

“The announcement of the TMC doesn’t mean anything, because the political agreement has already decided that it will be an independent investigation committee that will be formed during the transitional period by the civilian government.”

Analyst Alfatih Mahmoud thinks the announcement is a positive step.

Mahmoud says the TMC’s announcement of RSF responsibility is a positive step, as there should be a named force responsible. Mahmoud said it is expected that greater transparency will be sustained and a step toward the agreement will be made, as well as the punishment of all who are guilty.