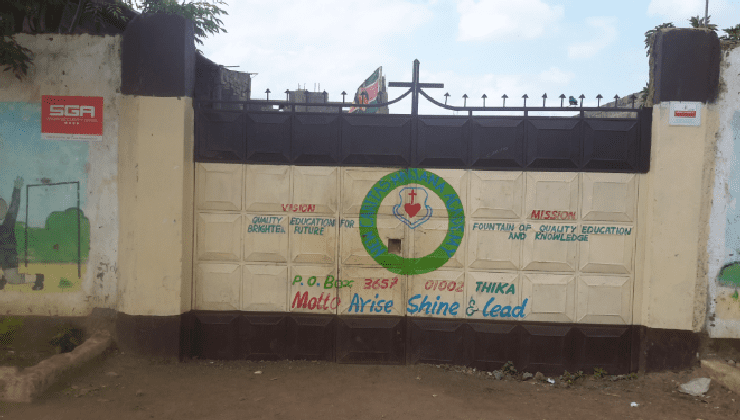 72 students from Caritas Mariana Secondary School in Thika were sent home after the institution was closed over allegations of sexual abuse and extreme religious practices.

The school that is run by a Nigerian priest is now embroiled in damning allegations that also include drug abuse and employment of unregistered teachers.

It is not the first time that Fr. Bertrand Maria Nwachukwu, who is in charge of the Caritas Mariana mission, has been linked to a controversial saga involving school children.

In 2016, Kiambu County officials raided a primary school and a children’s home run by his organisation after one of the pupils died and separate claims emerged of sexual molestation.

He responded by writing a protest letter accusing government officials of malice.

On Wednesday, Thika Sub-County Director of Education Ronald Mbogo said the allegations against the Caritas Mariana Secondary School in Thika are ” very serious”.

Mbogo said he received reports from an anonymous source who also claimed that the school employed unregistered teachers.

He revealed that a team from the Sub-County education office carried out investigations and later recommended immediate closure of the school after substantiating the damning allegations.

Education ministry officials have since initiated transfer of the students to neighbouring schools.

In an unexpected twist of events, parents joined the school management in claiming that the ministry has “ulterior motives”.

They are accusing the officials of being behind a ploy to grab the land on which the school in Thika is built.

“Parents are now stranded with their children at home and have nowhere to take them. Why did the officials close the school in the middle of the year? This is against the ministry’s policy,”Henry Ngure said.

Ngure, who is the Parents Teachers Association (PTA) chairman, insisted that move has jeopardised the fate of 10 KCSE candidates who failed to get admission into other schools.

Education officials have however indicated that names of the said students have been forwarded to the ministry and further assured parents that their children would be catered for.

The school director John Mwaura has since denied the allegations and even refutes the report from the ministry that investigations were conducted.