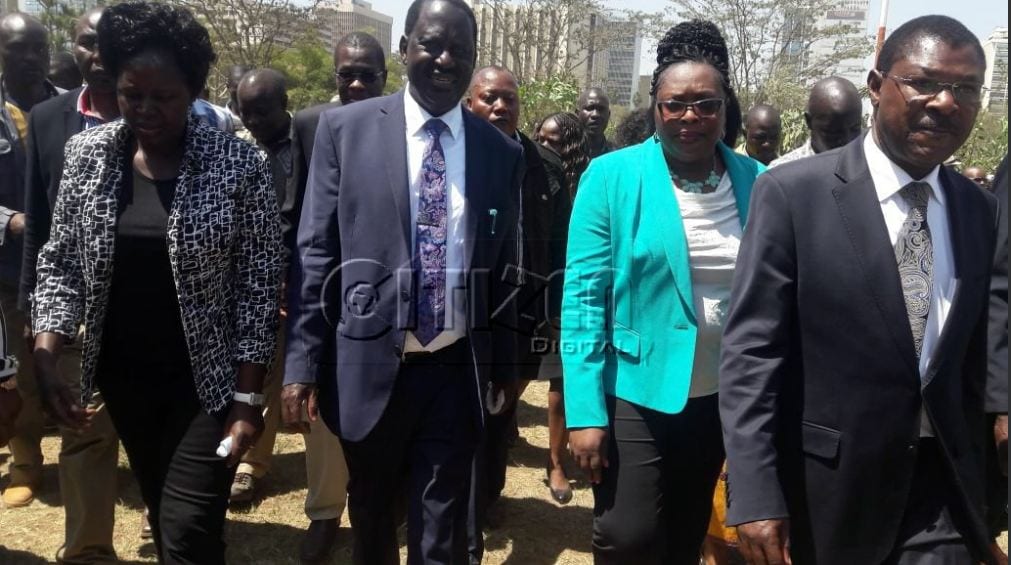 The National Super Alliance (NASA) leaders led by Raila Odinga and Moses Wetangula were on Sunday stranded after they failed to get a chance to address the congregation at an event organized by Prophet Owour’s followers at Central Park In Nairobi County.

The leaders who proceeded to the venue after a church service at All Saints Cathedral were left with no choice but to walk out after the organizers failed to grant them a chance to speak.
The followers, who were carrying twigs and placards, were celebrating the alleged ‘resurrection’ of one of their own identified as Mama Rosa from West Pokot County, who they believe was resurrected by Prophet Owuor.

The opposition leaders have been holding prayer sessions in the build up to the commencement of the hearing of the Presidential petition which was noved to Monday from today.

By Sunday, August 27 7:00pm, the Supreme Court was set to rule on admissibility of some documents as well as whether NASA will be granted permission to access IEBC servers, affidavits and evidence filed late after the constitutional deadline, late filing of affidavits and the enjoinment of Attorney General, Githu Muigai, the Law Society of Kenya, and other parties interested in the petition as friends of the court.

Earlier in the day, Raila expressed confidence that the Supreme Court will rule in his favor in the presidential petition owing to the evidence that they will be presenting before the seven-judge bench.

“We are satisfied with the proceedings at the Supreme Court, Kenyans are crying for justice and no force will subvert the will of the people,” Raila said.