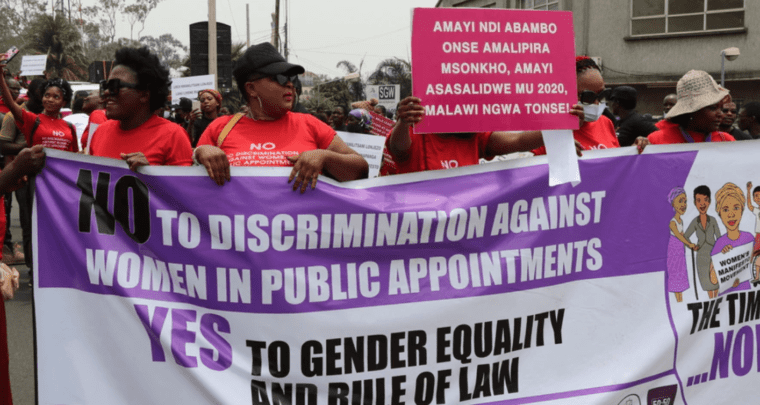 The protesters put on black and red attire and carried placards with messages to promote women’s rights.

The protesters accused President Lazarus Chakwera of failing to fulfill the Gender Equality Act which requires 60-40 representation of either men or women in public appointments.

Kathewera faulted Chakwera’s recent appointment of members in 54 boards of public institutions, where only 20% of them are women.

The activists also protested low female representation in Chakwera’s 31-member cabinet, where only four women were given full ministerial positions.

At a press conference marking his 100 days in office on Monday, President Chakwera said the low female representation is because he could not find well-qualified women to fill the cabinet posts.

Chakwera challenged women’s rights groups to provide him with candidates for top-level positions.

Kathewera said the president’s remark was an insult to women.

Some analysts said Chakwera should be given more time to fulfill his promises because he has just clocked his first 100 days in office.

Feminist Ulemu Hanna Kanyongolo said the law is not negotiable.

“It’s never too soon to respect the law and it’s clear the qualified women are there,” Kanyongolo said. “So there is no excuse for him to violate the law. The law you don’t negotiate and he knew that before he took the oath of office.”

In Blantyre, protesters handed a petition to Alfred Nyengo, the human rights resource manager, at the Blantyre City Assembly.