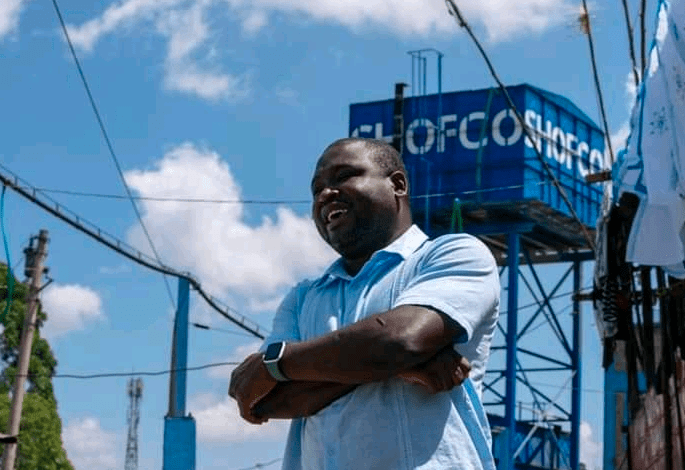 “I am a strong believer of hope. Hope is very important for me because with it, you can wake up in the morning and do something.”

That was the first statement made by philanthropist Kennedy Odede when he was hosted on CNN’s African Voices Changemakers, a programme that focuses on African non-profit leaders with localized solutions, this week.

But hope was not a word that existed in Odede’s vocabulary as child, growing up in Kibera, Kenya and Africa’s largest slum.

The oldest of eight children, he experienced extreme poverty, violence, became a street boy at age 10 years and later joined a gang.

All these are not things you associate with a change maker but this is exactly what Odede later became.

However, it could not have happened without his resilience and advise from his mother.

“I had grey hair at a very young age and I had kids laughing at me. This made me shy but my mother told me, ‘Ken, that is wisdom’. And she said, ‘you are the black Kennedy because there is a white (John F) Kennedy in America who became President and you are called after that man’. So I grew up knowing I am a leader,” Odede shared with the programme’s host Arit Okpo.

With his strong will and his mother fueling his ambition, Odede embarked on a journey that would later see him transform his community in a way he would never have imagined.

“I asked myself, ‘how can I do something for my community?’. I bought a soccer ball, organized tournaments that brought people together and we started interacting and doing things together like helping kids do homework. That is how SHOFCO was born,” added Odede.

Started in 2004, SHOFCO (Shining Hope for Communities) is a grassroots movement that catalyses large-scale transformation in urban slums by providing critical services for all, community advocacy platforms, education and leadership development for women and girls.

Speaking to CNN, Odede told of how a struggle to access water saw him put provision of this basic commodity on top of his wish list when SHOFCO came into being.

“We used to walk several kilometres to get water and most of the time we would suffer water-borne diseases because the water we got was contaminated due to the underground pipes getting mixed up with raw sewage,” remembers Odede.

It is for this reason that SHOFCO used a cutting-edge aerial piping system when installing water treatment facility in the slum which can pump up to 300,000 litres of water at a time to aerial pipes that connect to various water kiosks throughout the slums.

“This is the mother of all things,” Odede says of the water treatment facility.

“The water comes from underground and gets to one tank to remove particles then comes to a carbon filter. From there, it goes to another machine which kills bacteria after which it goes through reverse osmosis. Amazing.”

With the water going to various kiosks stationed at strategic points across the slums, members of this community are now not walking several kilometres in search of the precious commodity, all thanks to Odede.

The stations are community-owned and have boosted the economy as locals are able to put up shops selling various products to the many people who meet there to fetch water..

The unique challenges of slum dwellers such as difficulties in acquiring water, soap, masks and sanitizers with social distancing impossible in areas where most live in a 10-by-10 house with up to five family members while sharing a toilet with 50 households nearby put them at a great disadvantage.

“We didn’t know Covid-19 would come when we put up these water stations but when the disease landed here, the first requirement was sanitation. We had to use our water stations for free and as you go there to take water now, you are given a mask,” Odede told CNN.

The free masks are made by women in the community supported by SHOFCO, and one can make up to 50 in a day, while Odede’s organization also helped more women find jobs of making soap which is used for handwashing.

“We put hand washing stations at every entry point in all slums we work in Nairobi, Mombasa and Kisumu and gave over 600,000 families bars of soap. This did not just reduce cases of Covid-19 in slums but also ended water-borne diseases such as cholera and typhoid,” said the SHOFCO founder and CEO.

“Women get abused in the slums. I saw mothers struggle so the dream was to one day start a school for girls in the slum and the dream came true,” Odede told Okpo.

SHOFCO has seven clinics in the slums that attend to the community which had been struggling to access medical care for decades due to its high cost.

Odede and SHOFCO are recipients of numerous international awards such as the 2018 the Conrad N. Hilton Humanitarian Prize, 2014 People’s Choice Award for Outstanding Social Entrepreneur, Muhammed Ali Humanitarian Award among others.

“The awards inspired us and made people start believing in local solutions. I see hope for the continent. I see many startups. The new generation is transforming the new Africa,” said Odede.