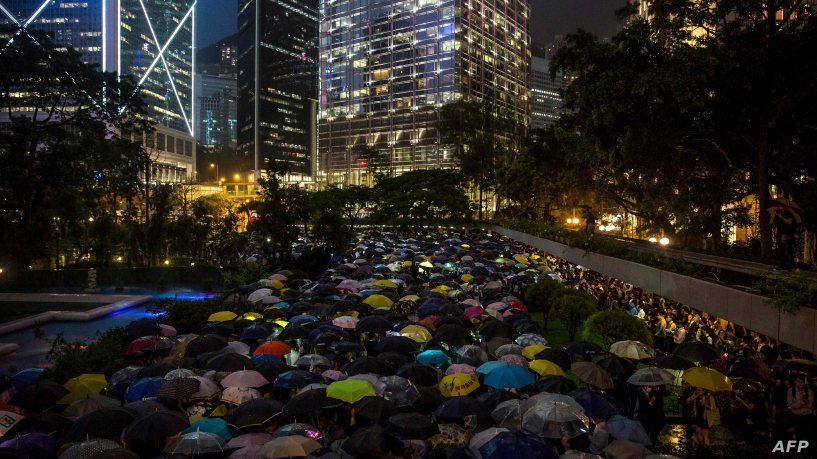 Thousands of Hong Kong civil servants are planning to rally Friday night in support of protesters and to urge authorities to rebuild confidence in the government as escalating protests rock the Asian financial hub.

Hong Kong police said Friday they had arrested eight people, including a leading pro-independence leader, after seizing weapons and suspected bomb-making material in a raid.

A wave of protests are planned across Hong Kong this weekend, as well as a strike that could bring the city to a standstill.

The protests in Hong Kong, a former British colony that returned to China in 1997, pose one of the gravest populist challenges to Communist Party rulers in Beijing.

The protests against a now suspended extradition bill, which would have seen people sent for trial in Communist Party controlled mainland courts, have expanded to demands for greater democracy and the resignation of Hong Kong’s leader Carrie Lam.

Under Chinese rule, Hong Kong has been allowed to retain extensive freedoms, such as an independent judiciary, but many residents see the extradition bill as the latest step in a relentless march toward mainland control.

The civil servants rally will be the first time government employees have actively promoted a demonstration in Hong Kong.

An open letter by a group of civil servants asked Lam to respond positively to five public demands: withdraw the extradition bill completely; stop calling the protests “rioting”; waive all charges against those arrested; set up an independent commission of inquiry; and restart political reform.

“At present the people of Hong Kong are already on the verge of collapse. HK has always been well behaved and enjoys a high degree of freedom. It is a pity that we have seen extreme oppression,” the letter said.

“At this difficult moment, government colleagues have to stay united and work together to uphold the core values of the civil service and not to affect the effective operation of the government,” said the statement.

Clashes between protesters and police have become increasingly violent. Police have been criticized for excessive use of force and failing to protect protesters from attacks from what opposition politicians suspected are criminal gangs.

The PLA has remained in barracks since protests started in April, leaving Hong Kong’s police force to deal with protests.

Police said seven men and one woman, between 24 and 31 years old, were arrested Friday after a raid on a building in the New Territories district of Sha Tin, where police seized weapons and suspected petrol bombs. Making or possessing explosives illegally can carry a sentence of up to 14 years in jail.

Andy Chan, a founder of the pro-independence Hong Kong National Party that was banned last September, was among those arrested. His arrest prompted about 100 protesters to surround a police station to demand his release, television footage showed.

On Wednesday, 44 people were charged in a Hong Kong court with rioting over their role in a recent protest that turned violent when thousands of activists clashed with police near Beijing’s main representative office in the heart of the city.

The escalating protests, which have shut government offices, blocked roads and disrupted business, is taking a toll on the city’s economy and scaring away tourists from one of the world’s most vibrant shopping destinations.

Hong Kong’s Law Society said in a statement Thursday that the violence must stop and called for an urgent solution. It said it supported an independent commission of inquiry, which may pave the way for reconciliation.