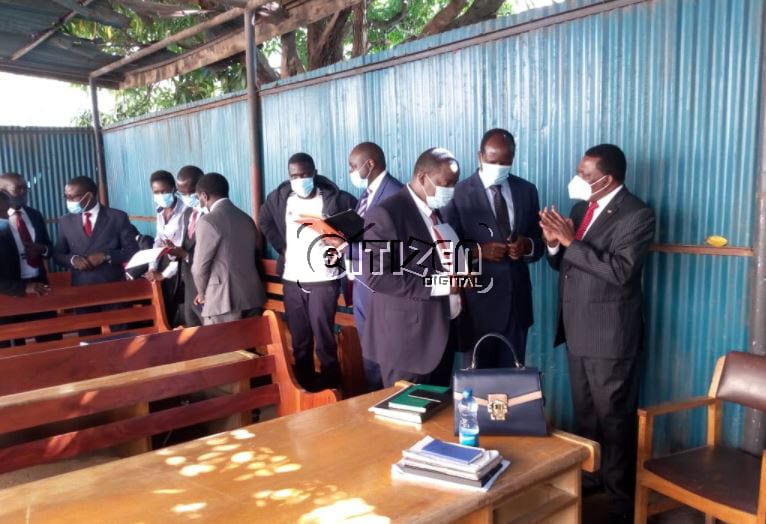 Migori Governor Okoth Obado and 10 other people are set to be arraigned at the anti-corruption court this morning to face corruption charges amounting to Ksh.73 million.

Obado and his co-accused, who include his four children, spent the night in police custody in Nairobi after being driven from Kisii where they were arrested after grilling by EACC detectives.

According to the Director of Public Prosecutions(DPP), the accused include 11 persons and 13 companies that were used in siphoning funds from Migori County coffers.

The Governor is accused of benefiting indirectly from Ksh.73.4 million that was paid to his four children who received payments from companies that traded with the county Government of Migori between the years 2013 and 2017 when Obado served his first term.

The web of suspected corruption indicates the governor worked with his friend, Jared Peter Kwanga, now termed by investigators as his proxy who then recruited his family members into the chain.

First was Kwanga’s wife Christine Akinyi with whom Kwanga are co-directors at Misoft Company limited, but also owns two other business entities that are listed as suppliers to Migori Government.

Kwanga also roped in his two brothers Joram Otieno and Patroba Otieno who separately own a total of seven companies that also allegedly supplied to Migori County and received payments. As if not enough, Kwanga, Patroba and Joram are believed to have roped in their elderly mother Peninah Auma Otago said to own two business entities also to be charged.

The alleged embezzlement of funds is said to have resulted in the payment of Ksh.73.4 million from the Migori County Government coffers.

The money was paid to 13 firms owned by six of the suspects. But the money trail followed to three children of Governor Obado, his two sons and a daughter who received in their accounts up to Ksh.38.9 million that they used to finance their school fees, upkeep and medical bills while in school in Scotland, United Kingdom and Australia, while part of it was used to buy two sport utility vehicles.

The remainder of Ksh.34.5 million is said to have found its way to Obado’s household when a house was procured in Loresho Ridge, and registered under his daughter Evelyn Okoth.

The suspects were on Wednesday processed at EACC Regional offices in Kisii County before embarking on a six-hour travel to EACC’s police cell at the Integrity Centre in Nairobi.

Reports indicate that the Director of Public Prosecutions maybe seeking to have Obado barred from accessing his office in Migori County Headquarters, until conclusion of the case.

Obado’s fortunes maybe on the downward spiral as three of his colleagues have since been barred from office following prosecutions in corruption related charges.