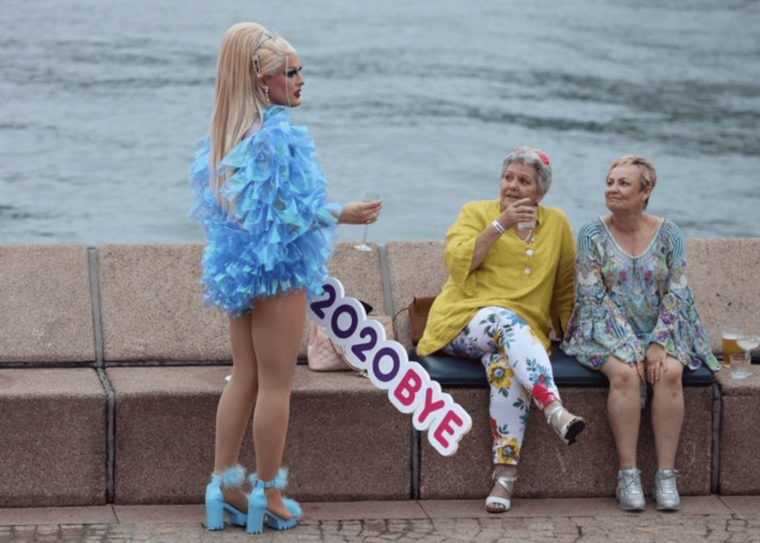 Fireworks soared into the sky above the Sydney Opera House, but the harbour below was a deserted ghost town, a fittingly creepy send-off for a year that will not be missed.

No light show illuminated Beijing from the top of the TV tower. St Peter’s in Rome was almost empty for vespers.

While some cities would launch fireworks over empty streets, others, such as London and Singapore, called off their displays. Paris, Rome and Istanbul were under curfew. New York’s countdown ball was set to drop on Broadway.

But in place of thousands of people jammed shoulder-to-shoulder in Times Square, the audience would be a few dozen pre-selected key workers – including nurses, doctors, a grocery store worker and a pizza delivery man – their families kept six feet (2 metres) apart in socially distanced pens.

Organisers booked Gloria Gaynor to sing her disco classic “I Will Survive”. (Lyrics: “You think I’d crumble? You think I’d lay down and die? Oh no, not I!”)

“It’s going to be actually, arguably, the most special, the most poignant, the most moving New Year’s Eve,” Mayor Bill de Blasio, who will push the button to start the crystal’s ball descent, told reporters. “In 2021, we’re going to show people what it looks like to recover, to come back.”

With more than 1.7 million people dead and 82 million infected around the globe since last New Year’s Eve – yet hope emerging that new vaccines can help tame the pandemic – the year ended unlike any other in memory.

Angela Merkel, in her 16th New Year’s Eve address as German chancellor, said as much: “I think I am not exaggerating when I say: never in the last 15 years have we found the old year so heavy. And never have we, despite all the worries and some scepticism, looked forward to the new one with so much hope.”

China’s President Xi Jinping said the year’s extraordinary hardship had allowed people to demonstrate their resilience: “Only in hard times can courage and perseverance be manifested. Only after polishing can a piece of jade be finer.”

In the Chinese city of Wuhan, where the pandemic originated a year ago, large crowds took to the streets including a group of hundreds who gathered in front of the old Hankow Customs House building.

When its old clock struck midnight many of them cheered and released balloons into the air.

“I’m so so so incredibly happy,” said 20-year-old student and tourist Yang Wenxuan. “I hope that (in 2021) I can obtain my bachelor degree and I hope I can find a boyfriend.”

There was a heavy police presence and strict crowd control, but the countdown appeared to proceed in a relaxed atmosphere.

In Australia, where Sydney’s fireworks annually serve as the world’s first big visual display of the new year, gatherings were banned and internal borders shut. Most people were barred from the city’s downtown.

“What a hell of a year it’s been,” said Gladys Berejiklian, premier of New South Wales state, which includes Sydney. “Hopefully 2021 will be easier on all of us.”

The virus did not stop North Korea from staging its celebration in Pyongyang. State media showed revellers in face masks filling the main square for a concert and fireworks.

But in Madrid’s Puerta del Sol, where Spaniards typically count down to midnight by stuffing grapes into their mouths at each clock strike, police put up barriers to keep people out.

Jose Angel Balsa, a 61-year-old retiree, said he would spend the evening “with family, just the four of us at home, holding lots of video calls and hoping for this to end as soon as possible.”

In Britain, under ever tighter restrictions to fight a new, more contagious variant of the virus, official billboards instruct the public to “see in the New Year safely at home”.

Italy’s bars and restaurants were closed, and a curfew imposed for 10 p.m.

Pope Francis cancelled plans to lead the service because of a flare-up of his sciatica, the Vatican said, and a cardinal read the pope’s sermon to a small congregation at a secondary altar.

At “A la Ville de Rodez”, an upmarket delicatessen in Paris, manager Brice Tapon sent customers home with packages of foie gras, truffles and pate for groups of two or three. Rules forbid more than six adults to gather around the dinner table.

One customer, Anne Chaplin, said she would “stuff myself with foie gras, champagne and all this food.”