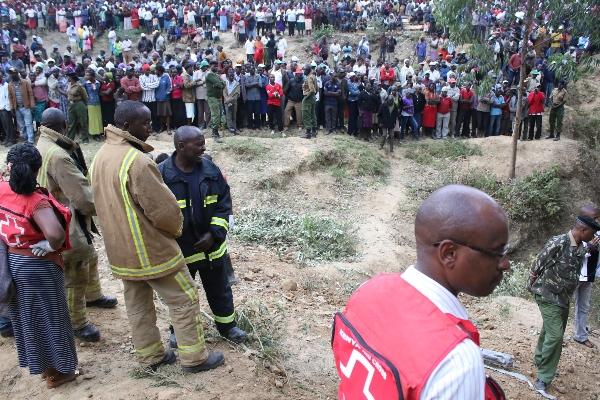 Four people were killed and another one seriously injured after a quarry caved in Thursday evening at Kaba-Une area in South Imenti, Meru County

Cheruiyoit said the tree fell on the quarry due to strong winds that has been experienced in the region in the recent past.

Residents say it is not the first time a quarry has caved in but the miners continued to risk their lives due to unemployment.

Three bodies have so far been recovered and rescue operations are ongoing to recover the fourth one.

The injured was rushed to Kanyakine hospital where he is receiving treatment.

Residents have raised concerns over the safety of quarries in the areas especially with the much anticipated El Nino.

They have also expressed their dissatisfaction over the rising levels of unemployment that have forced many of them to turn to mining in search of their daily bread.

This incident follows less than a week after another person died and one other injured after they were buried while harvesting sand along a river in Masinga Sub-County.

The resident said that the sand harvesting has exposed them to risks and has opened the area to flashfloods in the rainy seasons.

The mining business is proving expensive with several lives having been lost as a result of quarries collapsing and terror attacks.

In December last year, suspected Al Shabaab milita raided a quarry in Mandera killing 36 people and injuring many others.

One months ago, the County Government of Kwale shut down a sand harvesting quarry after four children were buried alive at Mabatani village.