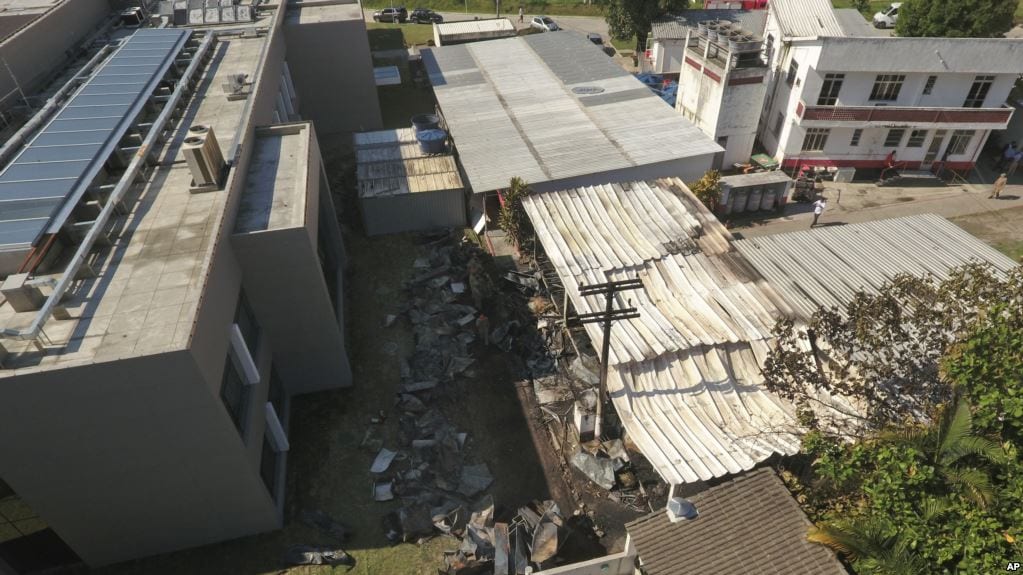 “We are distraught,” Flamengo President Rodolfo Landim said outside the complex, where friends, fans and neighbors gathered, some in prayer. “This is the worst tragedy to happen to the club in its 123 years.”

He did not take questions from reporters who also were outside the complex but added: “The most important thing right now is to minimize the suffering of these families.”

The cause of the fire was not known, but Claudio Castro, vice governor of the state of Rio de Janeiro, said authorities were looking at the possibility of a short circuit in an air conditioning unit. It is currently summer in Brazil.

In a statement, the city said the area that burned was registered for parking, not as a dormitory. The statement said an investigation into the licensing process was underway.

Sebastian Rodriguez, the uncle of one of the players who died, 15-year-old Samuel Thomas Rosa, said his nephew never complained about the conditions.

“He never told me anything bad about the training center,” Rodriguez said. “He liked the environment and his teammates there.”

Passion for soccer runs deep in Brazil, and as news of the tragedy spread, many of the world’s best players and top officials expressed condolences.

Chapecoense, a team in southern Brazil that lost 22 players in a plane crash in 2016, said on Twitter: “We are extremely sad and shaken by the news of the fire.”

Flamengo is perhaps the most famous club in the country, with an estimated 40 million fans nationwide. Supporters are so attached to their academy team that players have a motto for them: “Flamengo makes legends at home.”

Among the most famous players to come through the club are Ronaldinho and Zico, former stars on Brazil’s national team; top goal-scorer Adriano, who rose to fame at Inter Milan; and current Real Madrid star Vinicius Jr., who not long ago was living in the building destroyed by the fire.

The identities of those killed were not released but their names emerged through family members and survivors.

Beatriz Busch, the public health secretary for the state of Rio de Janeiro, said two of the injured were in stable condition while a third was in critical condition. The ages of the injured were 14, 15 and 16, according to a fire official who spoke on condition of anonymity because of agency rules.

Several people who appeared to be relatives entered the complex without speaking to reporters. Some were crying.

“These boys suffer so much in pursuing their dreams” of becoming professional players, said Caros Eduardo Araujo, a fan who left a bouquet of flowers at the gate of the complex. “I’ve been shaking since I heard the news.”

Samuel Barbosa, a 16-year-old who survived the fire, told Globo TV news that a lot of smoke filled the dorm.

“Most didn’t make it because there was so much fire,” Barbosa said.

Jefferson Rodrigues, who runs a small inn near the club, said he had reached a 15-year-old player he had befriended.

“I am very happy. I just spoke to Caix Suarez and he is alive,” said Rodrigues, adding that the youth told him he ran when he saw the flames. “He lost his phone, and all of his things, but the important thing is he is alive.”

Joao Pedro da Cruz, a 16-year-old player in the Flamengo youth league, told the G1 news portal that he decided not to spend the night at the facility because the team wasn’t going to train on Friday, and he went to a friend’s house instead.

“The majority of them [the team] stayed, my friends stayed [at the facility],” he said. “Today I woke up and heard this terrible news.”

Like many professional clubs, Flamengo has a development program for promising young players. Many, particularly those who live outside Rio de Janeiro, stay at the facilities while training.

The dream of many youths in Brazil, winner of five World Cup titles, is to make it into the professional ranks. The academies identify talented players at a young age, working with them as they grow, and the best eventually play for Flamengo or other teams in Brazil.

“If you are going to make it, you need to get into one of these academies. It’s a huge honor for these kids,” said Sebastian Abbot, author of The Away Game: The Epic Search for Soccer’s Next Superstars.

Abbot noted that only a tiny fraction of those who get into academies ever make it, but that reality doesn’t deter them.

“For poor kids, many see it as the only path,” he said. “That is a dangerous gamble, but you can understand why they are making that gamble. They see people like Ronaldo, Messi and Neymar making hundreds of millions of dollars.”