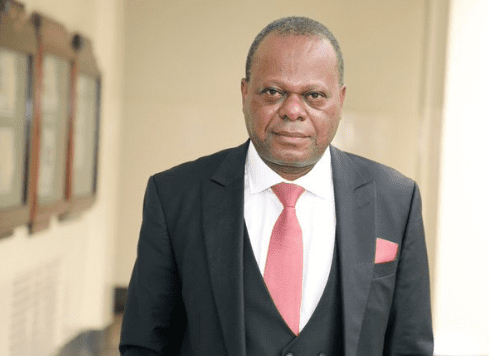 Prof. Dr.Dr Moni Wekesa was the ninth interviewee to face the Judicial Service Commission panel for the ongoing Chief Justice interviews on Thursday.

During the interview at the Supreme Court, he was tasked by the panel to defend his long salutation, if it was influenced by German culture, and whether he has a particular penchant for titles.

” I am not particularly keen on titles, however in academic circles, titles are everything. That is what we live on in academia, ” Dr. Moni explained.

He clarified that he has embraced the salutation used in Central Europe, where people are free to use as many titles as they like on their names.

“It is a culture that I adopted from one of my alma mater, we have different academic cultures, In Central Europe you can include all your titles, it is doing wonders here and people in Kenya are picking it up too,” he said.

The professor told the panel that if appointed, the first thing he would do is repair the strained relationship between the Executive and the Judiciary.

His second agenda, he says, would be building allies by involving all stakeholders; the third, to take the Judiciary to the people.

Professor Moni says that despite the fact that the Judiciary is doing life-changing work, Kenyans have little access to information.

In his bag of tricks should he be appointed the new Chief Justice, is the plan to tackle communication at the Judiciary differently; by enlisting the help of local musicians to dispense information about the arm of the government.

At the same time, he was put to task to defend his Anti-Doping Taskforce Report of 2014 which identified doping within Kenya Rugby Union (KRU) prompting the world governing body to launch investigations with support of World Anti-Doping Agency (WADA) into the claims.

Professor Moni said the decision was borne off a mutli-pronged approach that included interviews, research and laboratory tests.

“The results from the samples tested showed that the players had used products that had tested positive for steroids, we had talked to officials and coaches as well, we also got to know the people who had supplied the products and recommended disciplinary action,” Professor Moni said.