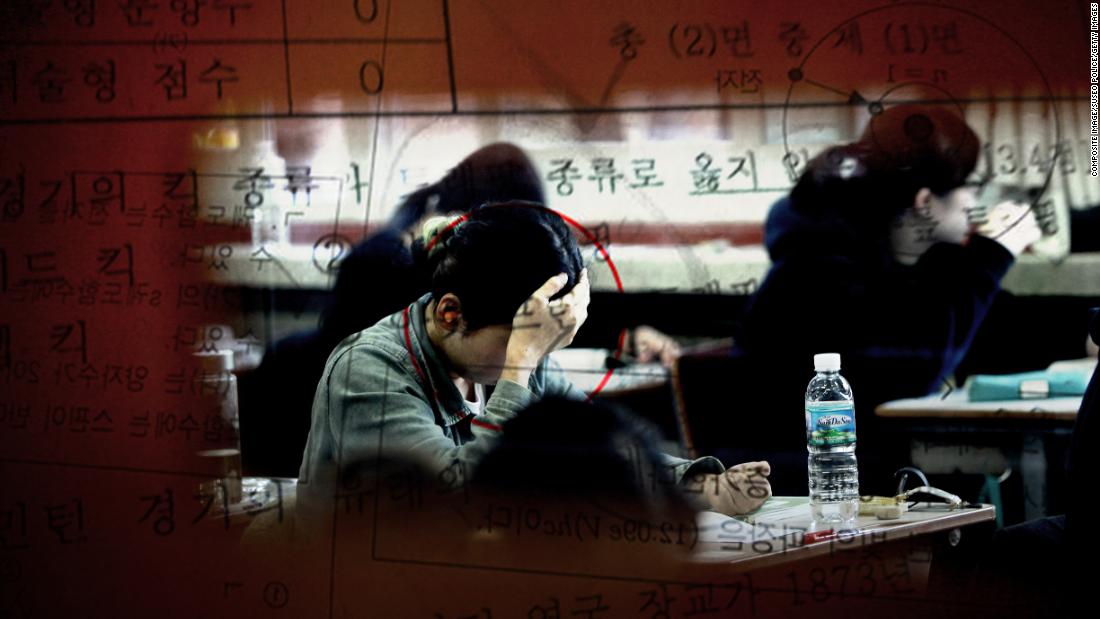 All flights in South Korea will be grounded Thursday, with no takeoffs or landings permitted for an hour.

Around the country, parents will be praying and packing lunch, and everyone will be avoiding words like “fail” or “fall” to avoid causing bad luck for the hundreds of thousands students taking the College Scholastic Ability Test (CSAT), South Korea’s university entrance exam.

The temporary no-fly order was issued by the Ministry of Interior to avoid distracting airplane noise and give test takers a fair shot, but in the run-up to this year’s exam, attention has focused on the opposite of fair play. This month, a cheating scandal implicated a prestigious private school in Seoul’s swanky Gangnam District, twin girl students, and their father, a senior school official.

At a press conference at Gangnam’s Suseo Police Station on Monday, officers displayed a host of yellow post-it notes and a small notepad filled with sequences of numbers. Beside them were several pages from an exam paper, clean except for a stack of numbers on the back page.

Reading from her report, investigation chief Jin Jeom-ok explained how police had been alerted to a potential cheating scandal at Sookmyung Girls’ High School, a private institution which boasts more than 100 years of history and claims to send more students to SKY colleges, the Korean equivalent of the Ivy League, than any other. In the past, the school has produced many successful artists, businesswomen, and politicians, including the current first lady of South Korea.

In late July, suspicion was aroused at the school when twin girls in the junior year shot up in school-wide rankings from 59th and 121st, respectively, to the very top. The fact that their father was a senior school administrator further fanned suspicion.

“(My daughter) came home crying and told me about what happened in school. They were shocked and felt betrayed,” Lee Shin-woo, Sookmyung parent, told local media. “Those students who were in (low positions) in the freshman year all of a sudden rose to the top. Then in the second semester, they won an award that only goes to the top 1%. Signs were there.”

School rankings affect university placements along with the CSAT results, and can spell the difference between a student getting their top choice school or not.

Lee and other parents demanded an investigation and began nightly candlelight protests in front of the school.

“Students were shocked that their teacher and the classmates that they trusted had leaked the answers,” Lee said. “The top students were especially disheartened.”

Jin, the investigator, said the twins’ father, Hyun Gyung-yong — against protocol — knew the combination for the safe which held exam papers and answer sheets. There was no surveillance camera in the room with the safe, so no evidence that he accessed it. But police said Hyun repeatedly stayed late alone at the school without logging overtime.

Protesting parents accused Hyun of taking the answer papers and copying or photographing them before providing to his daughters.

“(Other students) saw the twins study a small palm-sized notepad intensely just before the exam began. When they asked about it, the girls tried to hide it,” Lee said. “They saw them write the answers down on the exam paper, which looked like a sequence of numbers then filled in the answer sheet.”

Most South Korean high school students take two exams per semester. They are graded in relation to their classmates and then placed into one of nine brackets. The higher the bracket, the better the university they can gain early admission to. If students cheat their way up the rankings, the relative grading system means other children are inevitably bumped down to lower brackets.

The family’s attorney said that police had failed to provide any direct proof of Hyun stealing the answers, but on November 6, a judge ruled there was sufficient evidence and issued an arrest warrant.

“We believe Hyun stole exam papers and answer sheets a total of five times and supplied them to his daughters,” police said Monday after charges were laid. “Investigators suspect the twins brought the notebook into the exam and copied the correct answers onto the back of the exam papers (before the test began).

Police are requesting prosecutors indict all three as co-conspirators on a charge of obstruction of business, which could bring with it up to five years in jail or a fine of $13,000. Though the twins have already withdrawn from the school, Sookmyung said in a statement they would be officially expelled and their exam scores nullified. A tribunal will also be held to remove Hyun from his position.

As attention now turns to the CSAT itself, Lee, the parent, said the Sookmyung cheating scandal is likely not an isolated incident.

“I was told it is customary for teachers and administrators and their children to be at the same school,” Lee said. “But today it was proven that such a custom (can be) a crime. So we demand an investigation.”

In a statement, the Seoul Metropolitan Office of Education said the case “damages the absolute value of academic achievement, which is fairness. It is a serious incident of corruption which crumbles the people’s trust in public education.”

Officials promised to clamp down on teachers and their children being at the same school, and to install security cameras in all school offices which store exam papers. As for the twins, their attorney said they will plead not guilty at the trial, which will likely take place late this year or early next. Asked what they will do when all this is over, he said they “will likely take the GED, or maybe leave the country.”