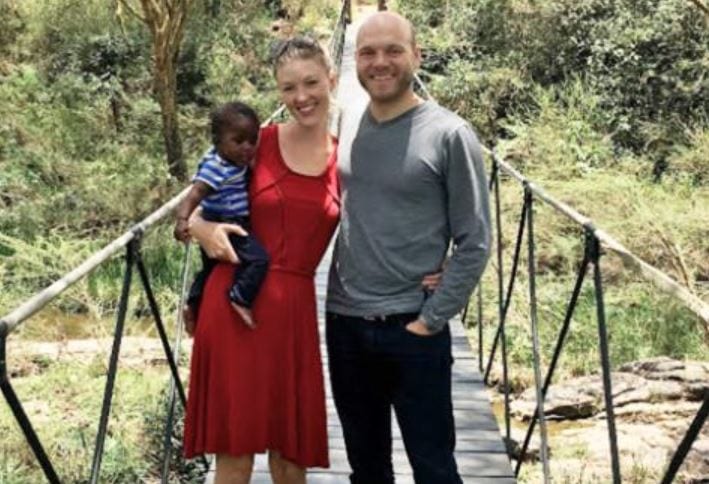 An American couple living in Nairobi, Kenya, is demanding answers after a three-year-old boy in their custody, they say, was taken away by authorities last month without explanation.

Surveillance footage from April 5, obtained by CNN, shows two cars pull up to the Mazzoncinis’ apartment complex and a group of people piling out. Shortly after, two women, their faces obscured by headscarves, can be seen carrying the boy downstairs and out of the building.

That was the last time Matt and Daisy Mazzoncini saw Kiano, whom they say they’ve been caring for since he was 6 months old.

“I had just finished putting Kiano to bed and he had just fallen asleep and I walked out of his room and saw Matt’s face and all these people and I just knew something was really wrong,” Daisy told CNN.

Kiano, who is Kenyan, was found as a newborn abandoned along with another baby believed to be his twin, according to a police report. The twin later died.

After receiving medical treatment, Kiano was taken to Mogra Children’s Centre orphanage in Kiambu, Nairobi. Daisy met Kiano when she began volunteering at the orphanage in the summer of 2016, and she soon started helping to pay for his medical bills. As an infant, Kiano suffered from pneumonia and a chest deformity, according to Matt, but in 2018 was diagnosed with atypical febrile seizures, according to medical documents seen by CNN.

Daisy and her husband Matt were named Kiano’s legal guardians by the Children’s Court of Nairobi in April 2017. However the order specified Kiano would not leave the jurisdiction of the court without the court’s permission.

But they say the plainclothes police that showed up at their home told them the guardianship order was fraudulent.

“I knew they were taking him. I just felt it. But there was nothing we could do. At this point there were 13 people. And they had made a human wall,” Daisy said.

The group offered no ID, search warrant or court order, according to the couple.

“I just stood up and I started yelling and I said, ‘Is that Kiano?’ I just started screaming, ‘You are kidnapping a child right now, you’re kidnapping our son!'” Matt said.

After Kiano was taken away, the Kenyan Police Directorate of Criminal Investigations (DCI) said in a post on their verified Twitter account that they had “rescued” #BabyJohnKiano from American citizens Mathew Mazzoncini and Daisy Mazzoncini, who they said were planning to travel with the baby back to the US.

“The child is well & in safe hands,” DCI said in the tweet, which was later deleted.

CNN has reached out to Kenyan police for comment, but they did not respond.

DCI’s claim was denied by the Mazzoncinis, who say they had no immediate plans to travel with Kiano.

Irene Mureithi, CEO of CWSK, told CNN that Kiano was now in “safe custody … with other children.” But she denied that her organization was involved in Kiano’s forced removal from the Mazzoncinis’ home, calling it a “security operation.”

While this is true for adoptions based on a 2014 ban, it is not the case for legal guardianship. The Children’s Act of Kenya states that a guardian “need not be a Kenyan citizen or resident in Kenya” and does not make any stipulations related to emergencies.

The ban on intercountry adoption of Kenyan children by foreigners was put in place after the US Department of State’s Trafficking in Persons Report 2014 was published. It put Kenya on a watchlist of countries that has significant human trafficking. In court documents, Mureithi said the ban was “in response to evidence that adoption and other related practices for children in Kenya had been used by unscrupulous agencies, officials and individuals to traffic Kenyan children.”

Kamau, who has met at length with the Mazzoncinis, says, in their case, “there is no adoption going on here” and that the couple “followed the right process.”

“The child was getting the best care, from what we have seen as evidence of this family, the removal of this child was illegal and not in his interest,” Kamau added.

The couple’s lawyers have since filed an emergency application in the criminal division of the High Court of Kenya. The Mazzoncinis’ advocate, Austin Ayisi, told CNN by phone that the police acted illegally. “They had no court order to take the child. Someone has to file an application in court to revoke my client’s guardianship and our client has rights to respond. There was no search warrant. They are illegally detaining the child right now.”

The case has already been delayed twice. The next hearing is scheduled for May 15.

The couple alleges the ordeal started when Mogra Children’s Centre orphanage, where Kiano lived, contested their guardianship in court. Mogra, which originally sponsored Daisy’s three-year work permit, signed a care agreement in December 2016 that allowed Kiano to live with her due to his medical condition but stipulated that the “care parent” can’t travel outside of Kenya and that Mogra retains the rights to remove the child from the couple’s home. That initial care agreement, though, as is standard in these arrangements, was made out of court between Daisy and Mogra. However, it was superceded by the legal guardianship agreement.

The judge, however, ruled in the couple’s favor and upheld their legal guardianship, and that’s when they say orphanage employees started harassing them.

“They would come to the gate where I was living and wanting to see him. I would get reports of this when I was out, oh these people came in a white van blocked the driveway. Refused to leave. I reported that to the police,” Daisy told CNN. “We actually ended up having to get a restraining order against that home.”

CNN contacted the Mogra Children’s Centre for comment, but they hung up. It is not clear on what grounds they contested the Mazzoncinis’ guardianship.

In a sworn affidavit submitted to court by CWSK in February, Mureithi claimed that the matter “appears to be a case of child trafficking.” The couple calls these allegations false and baseless and say if they were child traffickers then why didn’t police arrest them instead of just taking Kiano.

Kamau said he reviewed the couple’s legal papers and spoke extensively with the couple.

“Going by the law of this land they are not child traffickers. Going by the policies of this country, this family is a noble family,” he said.

Mureithi requested that the court block the couple from traveling with Kiano, revoke their guardianship and grant custody of Kiano to CWSK.

CWSK’s lawyers also stated that they did not find the child to be unwell and said he was “enjoying excellent health.”

“The (Child Welfare Society of Kenya) finds that these ailments are typical and common for children below five years and that they are treatable locally.”

But a pediatrician’s report from a top private hospital in Nairobi — MP Shah — included in court documents states that Kiano was rushed to the hospital suffering multiple seizures in September 2018 and had to be resuscitated after he stopped breathing. “He continued to have another three seizures over six hours … and was electively intubated,” according to the report.

Asked whether Kiano was receiving his daily epilepsy medication, Mureithi told CNN she did not know about his medical conditions.

Susan Otuoma, CEO of Little Angels Network, a child protection organization and licensed adoption agency in Kenya, told CNN that CWSK had no grounds to remove Kiano from the Mazzoncinis’ care as his legal guardian.

“The state cannot out of nowhere decide to remove a child from a guardianship arrangement,” Otuoma said. “Only the court has the powers to revoke a guardianship order and this can only be done on the request of any parent or guardian of the child, the child concerned or a relative of the child.”

Article 53 of the Kenyan constitution explicitly states that a child’s best interests are “of paramount importance in every matter concerning the child.”

The Mazzoncinis say they won’t rest until their little boy is at home with them, and have started a social media campaign to draw support for their case: #BringKianoHome.

“I just think of him … being all alone and not understanding … where mum and dad are … and that’s really hard,” Daisy said. “He’s been through a lot … we are the only parents he’s ever known.”