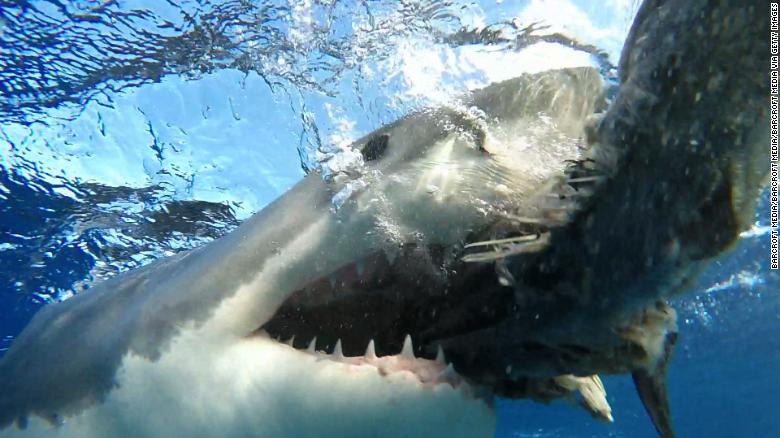 On Sunday evening, Max Keliikipi was driving home from work when he saw the waves at Makaha Beach on Oahu, Hawaii.

The 16-year-old grabbed his surfboard and paddled out, as he’s done almost every day this summer.

About 100 yards away from shore, he saw something sticking out of the water, but “blending in with the reef,” he told CNN.

Keliikipi thought it was a turtle at first, but soon realized it was a shark. So he jumped up, sitting with his feet on his board, not letting his legs dangle below the surface as easy prey for the aquatic predator.

The shark went straight for him, first bumping him off his surfboard.

“It bit a huge chunk off my board.” he said. “If my feet were a little further up the board, it would have bit my toes off.”

Keliikipi started swimming back to shore. “It was fight or flight. I chose flight.”

Comparing the shark’s length to his 6-foot surfboard, Keliikipi reckoned the shark was 7 to 10 feet long. At first he thought it was black fin, but his lifeguard friends said it was probably a tiger shark, he said.

Signs have been posted at the beach to warn beachgoers about the recent shark presence in the shallow waters.

He says he’s known somewhere between 10 and 20 surfers who’ve been attacked by sharks.

“It’s not common, but it’s not uncommon either,” he said.

Keliikipi doesn’t plan to quit surfing, but the attack inspired him to be more mindful on future maritime adventures. If you’re going surfing, he says to “go with someone who knows the area well.”

CNN has a guide on how to survive a shark attack, which includes tactics like acting “big” and trying intimidate the shark, and deliberately hitting the shark. It also says to spring for the shore, which is what Keliikipi did.

But don’t let fear keep you on the shore forever.