Get your savings ready: A list of all the concerts set to go down in Kenya this December 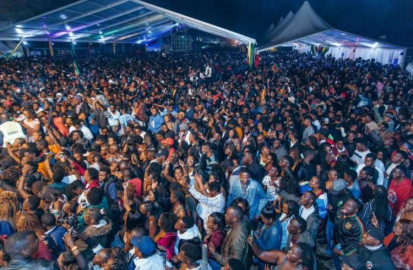 To survive all the concerts lined up in Kenya this December, you will need a larger-than-life wallet, the cardio of an Olympian, the knees of a mountain climber and the liver of a sailor.

Barely a month after President Kenyatta lifted the daily curfew, ending the cessation of night movement, concerts in the country were already lined up.

And the list is growing, with both local and international acts lined up, all gunning for your wallet, but for your entertainment.

From the Jamaican sensation Etana concert on October 30 to the Omah Lay concert at the Pizza and Wine Festival on the same weekend, the parties are back, and they are back with a bang.

And if you thought Kenyans would catch a break, after the two acts, the train of concerts and gigs gained speed with the performance of Black Coffee on Nov 7.

Nigerian crooner Adenkule Gold, or AG Baby if you like, followed suit with his own serving of electricity on November 13, apparently giving credence to his claim: “AG baby is your daddy”.

A week later, Uncle Waffles was in the country bringing the house down at the Amapiano event on November 17.

On December 11, Congolese Soukous singer Koffi Olomide, will be in the country,  for the “Legend Tour’’, as will be Nigeria’s Joe Boy who is set to headline the inaugural Afro Jam Festival.

Tanzanian singer Mbosso will also be in the country the same weekend, with a performance in Lodwar on December 11.

And you know who will be performing live on December 12?  Sauti Sol! The award-winning musical foursome will hold Kenyans captive for a two-day festival dubbed the ‘Sol Fest’.

Sol Generation stars Bensoul and Nvirii will also perform at the event.

UK rap group NSG is also scheduled to perform for the first time on the same day, December 12 in Nairobi.

Afro-Fusion singer Gabzy will also be performing on the same weekend, bringing the South-London vibe to Nairobi and to the further detriment of your purse.

So far it appears you may catch a break in time for Christmas, but your wallet won’t, because Charlie Black will be performing live in Kenya on December 31.

Jamaican artist Garfield Spence AKA Konshens, who has been hinting on a tour in Kenya for a while, is also expected in the country for a performance set to happen at The Carnivore Grounds on December 31.

And on Jan 8, Dancehall-pop artist Popcaan will continue the train of concerts into 2022, to ensure his fans stay unruly all year.