Three African elections to keep your eyes on in 2022 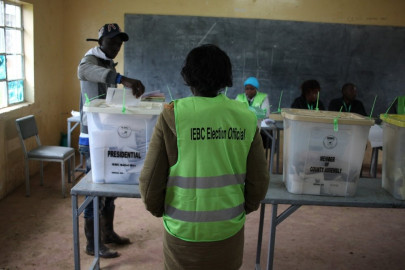 A file photo of a man casting a vote as an IEBC officer looks on.

Democracy has for the longest time in modern human history been pegged as the most ideal form of government, owing to its now popular mantra that calls for the formation of regimes designed for the people and by the people.

Western countries have, without a doubt, worked tirelessly to implement this form of government but the concept of democracy remains shrouded in uncertainty, especially among African nations.

In 2021 alone, there were four successful military coups in Africa, up from one recorded in 2020. Chad, Mali, Guinea and Sudan successfully overthrew their respective administrations in April, May, September and October, with little or no condemnation from the international community.

The continent is also notorious for giving birth to dictators who only vacate their positions in the event of death or military coups. With 2022 now upon us, a number of African states are expected to head to the ballots to elect leaders who will hopefully charter a new path for their respective nations.

Out of these countries Kenya, Senegal and Angola might play an integral role in attempting to undo or augment democratic erosion that has been witnessed in many African states. Below we take a closer look at the three countries and their political atmosphere ahead of their respective polls.

Kenyans are expected to take to the polls on the aforementioned date with current President, Uhuru Kenyatta, expected to retire after serving two-five-year terms in office. Deputy President William Ruto and Orange Democratic Movement (ODM) leader Raila Odinga are the front-runners to replace Kenyatta.

In 2017, a coalition between Kenyatta and Ruto floored Odinga’s fourth attempt at the Presidency, albeit in a rerun, but in March 2018, Kenyatta and Ruto had a public falling out after the former decided to come together with Odinga to endorse the BBI initiative in what is now famously called the ‘handshake’. The rift between the pair has seen Kenyatta back Odinga to succeed him as Kenya’s next president.

As of Tuesday, law makers were debating the amendment of the Political Parties Act, endorsed by pro-Odinga supporters, which experts say will lead to the creation of more high-ranking government positions should the ODM boss take over in August. Despite being vehemently opposed by  Ruto and his allies, who claim that it is unconstitutional, the bill was passed on Wednesday in a parliament session blemished with incidents of violence.

Kenyan elections have, for the longest time, been marred by alleged irregularities and subsequent political violence. The 2007 post-election violence, for instance,  left approximately 1,500 dead and over 300,000 persons displaced.

A smooth transition of governments, come the August polls, will not only be of importance to Kenya but also the larger Horn of Africa region with neighbours Somalia, Ethiopia and Sudan currently embroiled in domestic wars.

Senegalese citizens are set to elect new mayors across the country’s 550 municipalities later this month. Majority of the current mayors are affiliated to the Benno Bokk Yakaar (BBY) party led by current President Macky Sall.

The officials have held the positions since 2014 despite Senegalese law stating that they should only serve a single five-year term. This year’s elections, initially slated for June 2019, have been postponed four times by Sall's administration. In 2018, Sall was criticised after his regime changed election laws making it difficult for other candidates to contest in the 2019 presidential elections.

He has similarly been accused of interfering with judicial proceedings in cases involving members of the opposition party while publicly calling for their prosecution. Locals have attempted to condemn Sall’s actions only to be met with resistance from Senegalese security agents.

20 opposition parties have now amalgamated into the Yewwi Askan Wi coalition in an effort to finally overthrow the ruling party’s control over the available mayoral positions.

The political battle will be intense especially in Senegal’s capital, Dakar, a huge economic hub responsible for producing over 50 percent of the country’s GDP. Dakar's mayor, Soham El Wardini, has ties to President Sall's BBY party but his closest rival hails from the opposition batch.

How the elections proceed will positively or negatively make or break the West African country's democratic journey.

The August-slated elections will see President João Manuel Lourenço go against Adalberto Costa Junior of the opposing United Patriotic Front (UPF) party as he seeks reelection. Lourenço is currently allied with the Popular Movement for the Liberation of Angola (MPLA) which has been leading the government since 1975 .

After being handpicked by previous president José Eduardo Dos Santos in 2017, Lourenço was able to recover millions of dollars in graft money but his regime, years later, would make headlines over corruption allegations as well.

He has also been accussed of changing the constitution in his favour.

The first post-Dos Santos elections will without a doubt illuminate Angola’s 'perceived' advocacy for democracy especially since the country’s election authority, the Angola National Electoral Commission, has been accused of favouring MPLA on a number of occasions.