‘The answer to Kenya’s problems is coming on December 10,’ says Raila as he tours Nairobi 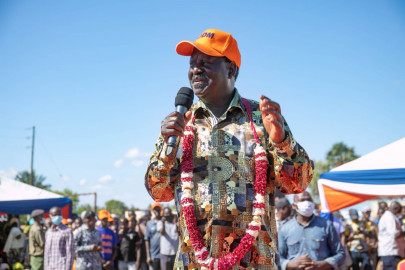 Raila Odinga, the leader of the Orange Democratic Movement (ODM), is on a campaign tour in Nairobi, promoting his Azimio la Umoja conference, which will take place on December 10 at the Moi International Sports Centre in Kasarani.

Raila Odinga has urged Kenyans to attend the event where he will declare his political position, claiming that he has the solutions the country requires.

On Sunday, Odinga spoke to crowds in Mwiki, Roysambu, and Kasarani after attending a church service in AIPCA Njiru.

During the church service, Odinga warned Kenyans against discrimination and called for a united country free from ethnicity.

The former Prime Minister is expected to formally declare his 2022 presidential bid on December 10.

“Raila ​has checked his calendar and he believes that December 10, is the day that God has made for us to converge at the Kasarani Stadium, that is the day that Baba will speak with Kenyans,” ODM Director of Elections Junet Mohamed stated on November 27.

This is a change from the December 9 date which had been communicated earlier.

Mohamed also stated that the much-awaited event will be held in the 60,000-seater football stadium and not the 5,000 capacity indoor arena of the sports complex.