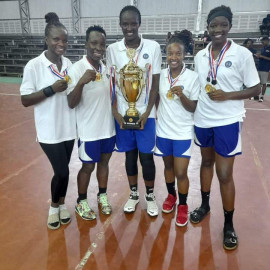 KPA were simply a class Maina’s side, dominating all quarters to clinch their third Zone Five crown and the first since 2017.

“It was something that we were not expecting and especially looking at the way the team had improved from the first game of the championship,” Maina said.

Maina added that he takes it positively having in mind the team showed improvements in the championship.

“For me it’s a positive take for this loss because if you look at ourseason hasn’t been that good as we have been struggling.

“We shall go back to the drawing board and work especially on our offense. The biggest problem was scoring and it’s something we want to improve on as we look forward to playoffs and the Club Championship in Africa,” Maina added.

Both teams had won their first four matches with Equity defeating REG of Rwanda 53-33, The Hoops of Rwanda 53-51, Gladiators of Burundi 45-27 and Don Bosco of Tanzania 76-36.

Prior to Tuesday’s victory, KPA and Equity had enjoyed a three-year dominance which came to a screeching halt in 2019 after they failed to retain their tittle.

The two sides have qualified for the FIBA Africa Women Cub Championship that will take place next month in either Egypt or South Africa.