Akwana keen to pull struggling Mathare out of relegation zone 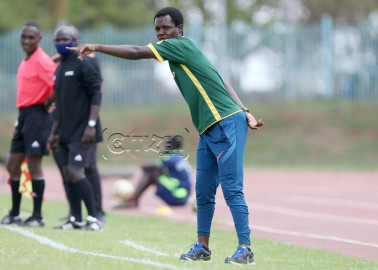 Mathare United head coach Ezekiel Akwana believes his side is improving and will soon be out of the relegation zone in the Kenyan Premier League.

This is despite losing 1-0 to KCB on Tuesday, leaving them 17th on the table with just seven points from 12 matches.

In particular, Akwana felt they had contained KCB and should have taken home at least a point had “officiating not leaned on one side.”

“Its true things haven’t be good in the camp because in the last two matches we conceded two goals but yesterday we conceded only one meaning we have improved enough and it’s my hope that we shall win our next matches so that we escape the relegation axe.”

He continued: “I really feel unlucky because the armature referee is the one who made us to lose due to his poor decisions and it’s my appeal to the FKF committee to ensure the referees are fair enough.

Akwana has in the meantime avoided debate of the financial crisis facing the club as revealed by Chairman Bob Munro, who has written to the FKF Caretaker Committee begging for quick action to bail them out.

“I can’t answer anything concerning the letter from our chairman. That’s his area and that of the CEO. My work is to coach, let me concentrate with it for now.

“I had rough time in my squad because most of my players were injured and some tendered resignation letters during the festive season, but for now I’m only focused in training which with the ones in camp,” said Akwana.

In the letter, Munro stated only nine clubs out of the 18 taking part in the top-flight are currently financially stable.

Munro called on the caretaker committee led by retired Justice Aaron Ringera to cushion clubs by giving them grants to avoid the shame of walkovers by the affected teams.

“Walkovers will rise as clubs lack funds and/or desperate players boycott matches, FKF PL rankings will soon reflect largely financial power rather than sporting merit. FKF PL will increasingly be dominated by clubs funded by the government agencies and parastatals.

Moreover, this imminent FKF PL crisis is also a humanitarian crisis, the collapse of only one club also means the financial collapse of at least 40 innocent and already desperate families, especially as school fees are due this week,” read the letter to FKF committee.

“Sadly, without urgent and major Ministry/FKF committee financial support this week, club collapses over financial instability will inevitably escalate in the next one to two weeks.”

For the avoidance of any doubt, the club collapses by next weekend will definitely include Mathare United,” further read the statement.