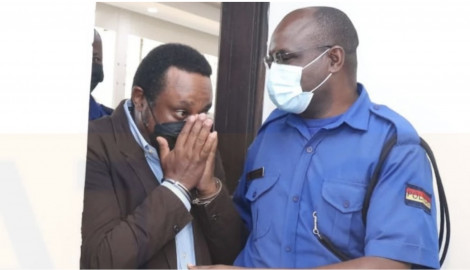 Mukuria Ngamau, the Director of Quorandum Limited, has been fined Ksh.720.8 million or serve a 27 -years sentence for defrauding the Youth Enterprises Development Fund of Ksh. 180 million.

He was found guilty of five counts of corruption by a Nairobi court, including conspiracy to commit an economic crime, unlawful acquisition of public property, and falsifying documents.

The offences were committed in 2014.

According to a statement issued by the Ethics and Anti-Corruption Commission (EACC), the commission received information that officials from the Youth Enterprise Development Fund conspired with a company called Quorandum Limited to embezzle Kshs. 180,900,000 sometime in 2015.

“Upon completion of investigations, the EACC submitted its report to the DPP who concurred with recommendations to charge Catherine Namuye Akelo, the Chief Executive Officer at Youth Enterprise Development Fund, Bruce Odhiambo, the Chairman at Youth Enterprise Development Fund, Mukuria Ngamau and Doreen Ng’ang’a, the Directors of Quorandum Limited and Quorandum Limited with various offences,” the EACC said.

The suspects were arrested by police in 2016 and arraigned before the Nairobi-Milimani Anti-Corruption Court, where they pleaded not guilty.

“The first two accused persons, Catherine Namuye Akelo and Bruce Odhiambo passed away during the pendency of the case and the charges against them abated,” the EACC added.

The court would acquit Doreen Ng'ang'a in April 2021 under section 210 of the Criminal Procedure Code.

The same court determined that Mukuria Ngamau and Quorandum Limited had a case to answer; the hearing concluded with the prosecution calling a total of 31 witnesses.