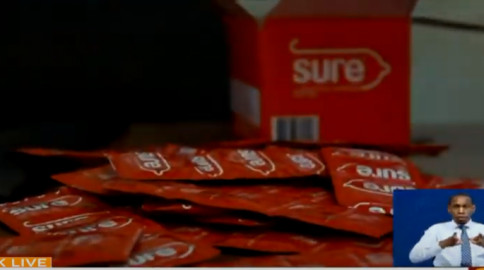 Despite condom use being one of the key prevention pillars in matters HIV\AIDS, sexually transmitted infections and unwanted pregnancies, the uptake is low here in Kenya.

This now shows that there is still a lot to be done by different stakeholders including the Ministry of Education and the religious sector regarding sex education and HIV prevention especially among the youth.

As the World AIDS Day nears, when countries take stock of how their strategies have dealt with the HIV epidemic, a conversation regarding condom use as a preventive measure is taking centre stage in Kenya.

Dr. Gordon Okomo, the Director of Health in Homa Bay, said: “When I was young we used to hear ABC, when I was in primary school. But I don’t know what has happened to the Ministry of Education, these are a strong partner whom we should bring on board so that the messaging and issue surrounding condoms, prevention of HIV and STIs should be inculcated in the school programme and curriculum so that children as they grow up they realise that this is one of the best preventive methods to avert HIV.”

In a stakeholders meeting between the National AIDS Control Council (NACC), National AIDS and STI Control Program (NASCOP), county health directors and other partners like UNAIDS, it was clear that the use of condoms as a prevention method would go a long way in reducing the cost that arises from the treatment of HIV/AIDS related infections.

“We have funding from a donor, and there’s always government, and we have procurement of around 1.3 million condoms. The cost of the condoms will be around USD 4.6 million, so definitely you can see it is not little,” said Dr. Catherine Ngugi, Head, NASCOP.

Kenya’s HIV epidemic is driven by sexual transmission, with the age between 15-29 years accounting for 62% of new HIV transmissions recorded in the 2019. A majority of them being females.

According to the National AIDS Control Council, the uptake of condoms within the same age group is quite wanting, with females accounting for only 37.5% of condom use compared to their male counterparts who account for 68.9%.

Dr. Ruth Masha, CEO, NACC, said: “We have to disrupt the norm and the culture and disrupt the religion, where we require them to tell the truth to our young people.”

With the use of condom as a prevention method message set to gain momentum, the Ministry of Health hopes that other interventions like establishment of supply and logistics management systems for condoms as well as addressing market barriers to create more space and increase economic incentives for the commercial sector will work a long way in sustaining a condom programme in the country.