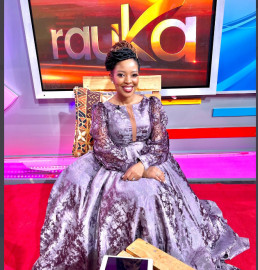 A celebrated musician, with two albums under her belt, Kambua hosted her last show on Sunday, January 16, bidding bye to thousands of loyal viewers and her co-host duo of DJ Gee Gee and Timeless Noel.

The host is also hosted by gospel musician Karwirwa Laura and Ken the DJ.

"We move from seasons to seasons and today, I would like to take a bow and I want to hung my boots, to all of you who have allowed me to come into your home for the last 12 years,"  Kambua said on Sunday.

"Thank you for allowing me to come into your homes, and to minister, it has been a beautiful journey,"

The singer thanked the Royal Media family, particularly the Chairman, Dr. SK Macharia and group MD WAchira Waruru as well as the show producers who include among others State House spokesperson Kanze Dena.
"I would like to thank the Royal Media Services our Chairman , our MD Waruru, who believed me when I was green and I did not know anything and all the show's producers and camera man that I have had the chance to work with over the years," She added.

While not much is known about the next career phase of the musician-turned-TV-host, the world’s canvas is laid and ready for the multi-talented Ambrose University graduate.

A self-confessed hat lover, Kambua’s life cap is adorned with a great many feathers, from a stint in acting, to featuring in commercials as well as a voice-over gig.

She also has some 1.3 million followers on Instagram, placing her in the upper tier of Kenyan public figures, 850,000 on Facebook and some 170,000 strong followers on Twitter.

Kambua who is one of the most sought after gospel musicians in Kenya discovered her love for music as kid, while attending the Kianda and Lukenya Schools.

The TV host who joined Royal Media Services Citizen TV in March of 2010, completed a summer performance program at Berklee College of Music in Boston in the summer of 2007.

Thereafter, she enrolled for a Bachelor of Arts in Music at the Ambrose University in Calgary, graduating with a major in classical voice.

Away from the glare of the cameras, Kambua, a wife and a mother of one enjoys singing and travelling, and making new friends.