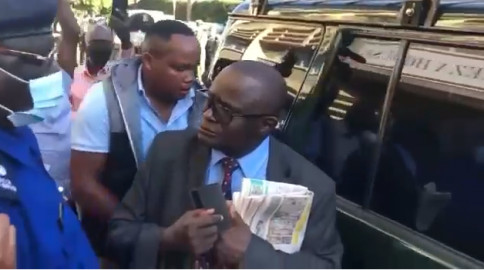 Former Commissioner-General of the Kenya Prisons Service Wycliffe Ogalo being directed to a police vehicle on November 17, 2021.

NPS, in a statement, said the officers who were seen on video seemingly accosting Mr. Ogalo at Magereza House and directing him to a waiting police vehicle were only escorting him home.

Their presence at the premises, the statement alleged, was only to oversee a smooth transfer of office from Ogalo to his successor.

“The reporting appearing in mainstream and social media that the former Kenya Prisons Service’s Commissioner General Mr. Wycliffe Ogallo has been arrested by police is not accurate as stated,” stated NPS.

“This is to clarify that police only facilitated a smooth and seamless handover of office and escorted the former Commissioner General to his home.”

President Uhuru Kenyatta had earlier on fired Ogalo as the Kenya Prisons boss following a breach in security at the Kamiti Maximum Prison which led to the escape of three terror convicts.

The Head of State also directed Interior Cabinet Secretary Dr. Fred Matiang’i to spare no resource in pursuing and capturing the Kamiti escapees.

He urged all State investigative agencies to bring every person found to have been involved in the prison break to full account.