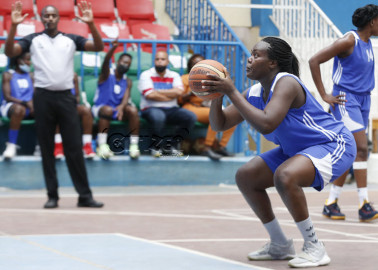 A total of eight teams will be involved in the week-long regional competition scheduled for November 18-24 at the Dar National Arena.

"I am confident that my team is ready because I have prepared them well, we do not have any injuries. We hope we are going to do well and take the championship that has eluded us for two years though we expect some stiff competition from home teams JKT Queens and Don Bosco together with the teams from Rwanda, Burundi, Ethiopia and our counterparts Equity Bank,” he said, adding that, “So it won't be an easy competition but we hope it will be good for us.”

The championship starts on Wednesday as KPA plan to take the title that they last won in 2017. The team arrived in Tanzania early Monday morning and trained at National Indoor Stadium hoping that the vast experience that Ojukwu has will help them carry the day.

As a player, Ojukwu was among the squad that travelled to Cairo, Egypt for the Fiba Africa Club Championships in 1992 and he was also a member of the Kenya team that participated in the Fiba Afro-basket show at the Moi International Sports Centre, Kasarani in 1993. Kenya finished fourth behind winners Angola, Egypt and Senegal and this remains their best position ever.

KPA are top in the Kenyan basketball league with 35 points from 18 games and are hoping to use their current form to dominate the championship after they lost to JKL Dolphins of Uganda in the finals at the same venue in 2019.