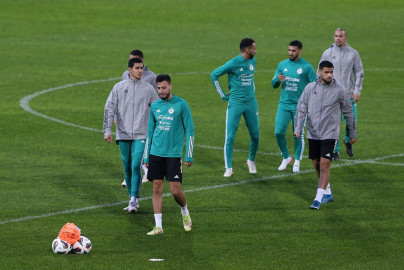 Training of the Algerian national football team at the stadium, Mustapha Tchaker Blida in Algeria on November 14, 2021, In anticipation of the Borkina Faso qualifying match of the FIFA World Cup - Qatar 2022 (Photo by Billal Bensalem/NurPhoto)

All but one of the 10 countries that have advanced to the last stage of Africa's World Cup qualifiers will have another matter on their immediate agenda before determining who plays at the 2022 finals in Qatar.

Algeria, Cameroon, Egypt, Ghana, Mali, Morocco, Nigeria, Senegal and Tunisia are all on course to qualify for Qatar but compete at the Africa Cup of Nations finals in January before switching focus back to World Cup qualification in March.

Only the Democratic Republic of Congo are through to the last round of Africa's World Cup preliminaries despite having flopped in the Cup of Nations qualifiers this year.

The Congolese hired veteran coach Hector Cuper to stage a recovery and won their World Cup group to reach the playoffs.

No draw date has been set but a Confederation of African Football spokesman told Reuters it would likely be conducted in January - during the Cup of Nations finals.

World Cup qualifying has proven intense and welcome preparation for the Cup of Nations, no more so than for hosts Cameroon.

They have been largely unimpressive over the last two years but got a boost by beating and eliminating a strong Ivory Coast team 1-0 in Yaounde on Tuesday amid ecstatic support that they will seek to draw strength from at the Cup of Nations.

But others, like defending champions Algeria, will go to the tournament concerned about stuttering performances in the World Cup qualifiers hosted in an intense three-month spell.

"Qualifying to the next phase of the World Cup is satisfying but there were no easy matches. The players found it tough, but it was good for their concentration and determination," said Algeria coach Djamel Belmadi.

"The Cup of Nations is going to be just as hard."

Others among the 10 World Cup qualifying group winners were more convincing and secured progress early, meaning they could use some games to prepare for the Jan. 9-Feb. 6 Cup of Nations.

"We gained much as we were able to test different strategies and formations and try new players. It was a chance to give them playing time so they would gain experience and confidence," said Egypt coach Carlos Queiroz after Tuesday's 2-1 win over Gabon.