Raila hints at working with Kalonzo ahead of 2022 elections 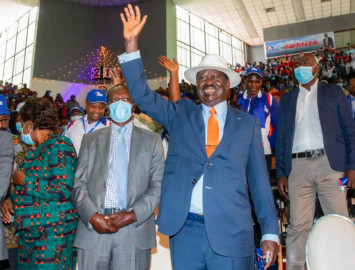 Orange Democratic Movement Party leader Raila Odinga has hinted at a coalition between him and the Wiper Party Leader Kalonzo Musyoka.

Odinga who was speaking at the Wiper National Delegates Conference held at Kasarani on Thursday suggested that since his political beliefs and those of Kalonzo align, he is certain they are bound to work together.

The former premier dismissed critics questioning his presence at the event saying that he was invited for being a good friend and a brother to the Wiper leader.

While commenting on his friendship with the former vice president, Odinga said that the two have a history of walking in unity and ensuring the prosperity of this country since the late President Moi’s era up to the last presidential elections in 2018.

Consequently, Odinga lauded the Wiper leader for his achievement and for being endorsed as the party's flag bearer.