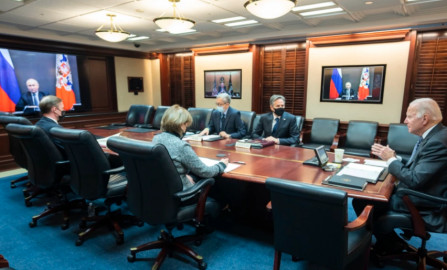 President Biden held a secure video call with President Putin of Russia to discuss a range of topics in the U.S.-Russia relationship, including U.S. concerns about Russian military activities on the border with Ukraine, cyber, and regional issues, Dec. 7, 2021.

U.S. President Joe Biden told his Russian counterpart, Vladimir Putin, Tuesday that the U.S. and its European allies have “deep concerns” about Moscow massing its forces near the Ukrainian border and would respond with “strong” economic sanctions if Russia invades its one-time satellite country, the White House said.

In a readout after the leaders’ two-hour virtual summit on a secure video linkup, the White House said Biden “reiterated his support for Ukraine’s sovereignty and territorial integrity, and he called for de-escalation and a return to diplomacy.” It gave no indication whether Biden spelled out possible economic sanctions against Russia in the event of a Ukraine invasion.

The White House gave no hint of how Putin reacted but said the two leaders “tasked their teams to follow up, and the U.S. will do so in close coordination with allies and partners.”

The Kremlin did not offer an immediate assessment of Putin’s reaction to his discussions with Biden.

The White House said the two leaders also discussed strategic arms stability across the world, costly ransomware attacks emanating from Russia that have shut down computer networks at U.S. companies, and their joint efforts to curb Iran’s nuclear weapons development.

After the call ended, Biden was expected to hold a separate call with several U.S. allies to brief them on his conversation with Putin, including President Emmanuel Macron of France, Chancellor Angela Merkel of Germany, Prime Minister Mario Draghi of Italy and Prime Minister Boris Johnson of Britain.

Moscow has positioned 70,000 troops along Ukraine’s eastern border, according to the U.S., with American officials suspecting an invasion is possible in early 2022. Russia already annexed Ukraine’s Crimean peninsula in 2014, with then U.S. President Barack Obama, and Biden as his vice president, condemning the takeover but not intervening militarily.

Ahead of the summit, White House officials said the U.S. would exact “a very real cost” against the Kremlin if it launches a new invasion.

Putin, in turn, wants the U.S. to guarantee that the post-World War II NATO military alliance will never expand to include Ukraine, a demand the Americans and their 29 allies will not accept. The White House made no mention of NATO in its readout of the talks.

On Monday, White House press secretary Jen Psaki said, "We've consulted significantly with our allies and believe we have a path forward that would impose significant and severe harm on the Russian economy" in the event of a Russian invasion of Ukraine.

At the virtual summit, Biden spoke from the Situation Room at the White House and Putin from his retreat in Sochi.

Ahead of the talks, Kyiv contended that Russia is sending tanks and snipers to war-torn eastern Ukraine to "provoke return fire." Ukraine's Defense Ministry accused Russia of holding "training camps under the leadership of regular servicemen of the Russian armed forces." Moscow has not commented on the allegations.

U.S. intelligence has not determined whether Putin has made a final decision to invade.

Putin has been at a loss to curb NATO expansion. Numerous former Soviet-satellite states have been added to the 72-year-old alliance, including Poland, Hungary and the Czech Republic in 1999.

There is little prospect that Ukraine would be invited into NATO anytime soon, but the U.S. and its allies have not ruled it out. No outsider, such as Russia, has membership veto power.

Biden’s talks with Putin came as opposition Republican lawmakers increasingly have criticized his performance on the world stage. They contend the Democratic president has done little to curb Iran’s nuclear weapons development program, even though Tehran claims it is for peaceful purposes, or limit China’s military strength in the Indo-Pacific region.

"Fellow authoritarians in Beijing and Tehran will be watching how the free world responds," Senate Minority Leader Mitch McConnell said of the Biden-Putin talks. "And President Biden has an opportunity to set the tone when he speaks with Putin."