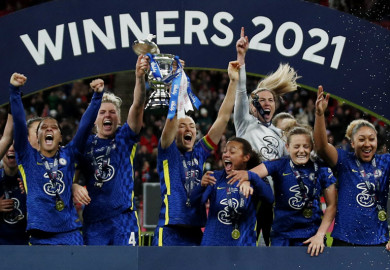 Chelsea saw off Arsenal 3-0 in a dominant display in the delayed final to last season's FA Cup to win their first domestic treble.

Emma Hayes' side, who also won the Women's Super League title and League Cup last season, were deserved winners in front of 40,942 fans at Wembley on the 50th anniversary of the competition.

England international Fran Kirby put down an early marker, capitalising on a mistake at the back to net within three minutes, and Sam Kerr scored a brace in the second half to seal Chelsea's victory.

Chelsea were utterly dominant - Sam Kerr and Kirby both hit the woodwork, while Arsenal goalkeeper Manuela Zinsberger made numerous saves, particularly in the first half.

The Blues were frustrated not to be further ahead at the break but they made sure of victory shortly afterwards when Kerr teased defender Lotte Wubben-Moy before sliding it into the bottom corner in the 57th minute.

The Australian international, who had lifted it on to the crossbar in the first half, then made it 3-0 with an audacious chip and celebrated just as coolly, flapping her hand to signal how hot it was before sticking her tongue out playfully to the crowd.

Arsenal - the record 14-time winners of the FA Cup - were second-best throughout and despite a slight improvement in the second half, produced a performance which was a far cry from their domestic form this season.

The victory was Chelsea's third in an FA Cup final and all three of their titles have come under Hayes' guidance.