58-year-old Kenyan actor Abel Amunga speaks on why he cannot date women in their 40s, 50s 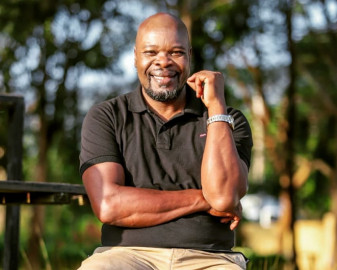 Kenyan actor and voice over artist Abel Amunga, 58, now says women in their 40s and 50s shun him because they say he’s too young for them.

Amunga, who is also Gospel singer Ruth Matete’s father, made the revelation in an interview where he spoke out about his past love life and relationships.

He stated that life begins at 40, however adding that age is such a complication in relationships.

He said that love is not enough in marriage, noting that friendship is the basis and foundation of all relationships.

“Somehow, the ladies who match me right now should be between 40 and 50 years, but bring me five ladies who are within that age group and they will be too old for me as they refer to me as a young man,” Amunga told Buzz Central on YouTube.

As a result of his experience in previous relationships, he now acknowledges that love is very complicated and that true love comes from God.

“What breaks most relationships is not only violence, infidelity and money, but also ego and pride. When a man or woman goes out cheating, it is because their ego has been tempered with,” he said.

Amunga, who also dabbles in quite a bit of singing, said trouble crops in a marriage when the man does not properly tend to the needs of the woman.

“A woman was created to be loved. When you don’t give her what she deserves, she will seek it from elsewhere,” he stated.

The actor-cum-musician also revealed that he got into another relationship, soon after Matete became of age, but that he suffered yet another heartbreak in that too.

“What I went through in that relationship left me completely heartbroken. I promised my daughter never to remarry and expose her to another stepmother,” he narrated.

“Unfortunately, heartbreak becomes a trend. When you have been heartbroken before, it is bound to be a cycle until you go through deliverance.”

When asked about the possibility of another Mrs. Amunga in the near furure, the 58 year-old said;

“At some point I would definitely need someone to settle down with. Someone that I can sit down with, reminisce and tell about my stories; my failures and success, just for companionship and not necessarily for bearing children.”