Aussems worried as closure of transfer window nears without signing 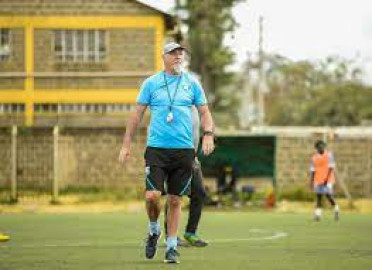 AFC Leopards head coach Patrick Aussems has urged the club’s management to quickly settle dues owed to their former foreign players and coaches in order to allow FIFA lift the current transfer ban slapped on the team in March.

According to the Belgian, the 12-time champions are in dire need of at least two strikers to help get their season back on track following back-to-back losses against former champions Gor Mahia and Bandari FC.

“I said a week ago that I am hoping we will be able to recruit at least two strikers. Did you see the game and how it became clear that we need some fresh legs?” Aussems paused, adding; “I’m calling the management once again to look into this matter because it is derailing our plans in this season. We lost many players and again we can’t sign. It becomes difficult.”

The former Simba SC tactician said he had already identified the type of players he prefers to bring to the den but this will depend on how swift the Leopards top brass will handle the FIFA ban before the current transfer window is shut on October 31.

“The board is here, ask them for it’s now been four or five weeks since I told them that we need players and we already know which players we would like but unfortunately this FIFA ban is not yet solved so let’s see what will happen in the future,” he stated.

They lost 17 players to their rival teams including sharp shooters Elvis Rupia, Bienvenue Shaka and Clyde Senaji which forced them to turn to their academy players this season after they were locked out of signing new players.

Aussems however took issue with the Sunday’s officiating in their 2-1 loss against the hosts Bandari, saying if the issue of poor game management was left to unaddressed it will back track all the Kenyan gains in football.

“These guys are totally incompetent and for sure they are dragging the Kenyan football in to the mud,” Aussems fumed.

Following the defeat, Leopards dropped to position 12 on the FKF Premier League log with four points, five behind leaders.

In the four matches Leopards have played this season, they have only scored two, one each against Tusker in their opening fixture and another against Bandari FC through a penalty.