Junet clarifies ‘if Raila wins, Presidency will belong to the people of Nyanza’ remarks, says he was misquoted 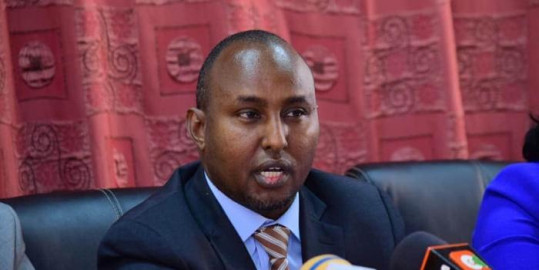 Suna-East Member of Parliament Junet Mohammed now says his words were misinterpreted and he never called for the exclusion of other communities when forming the next government.

Mohammed sparked controversy after making a remark in Nyamira County last week that seemed to imply that should Raila Odinga win the 2022 general elections his government would only focus its efforts on the people of Nyanza County and not Kenya in general.

“Let’s not be nervous, when Baba wins the government will belong to us, the people of Nyanza . We don’t want the media people to know about this. Mutahi Kagwe might get angry but you’ve had it for twenty years now. This time round it’s the Nyanza people. Mutahi you will come here as a visitor," said Junet last week.

However, appearing of Citizen TV's Monday Report show, Junet said: “What I said was totally blown out of context.  It was misinterpreted and misdirected. Campaigns are local and I was just addressing the Kisii people and I was telling them that this time as the people of Nyanza we have an opportunity to lead the country. A Nyanza resident might actually lead the country.”

He added: “Excluding anyone is not our nature as Nyanza people.  If I am a minority in Nyanza and I am included how can I exclude people from others parts of Kenya?”

Mohammed similarly insisted that he was endorsing a message of unification around the country and not one of separation as some might suggest.

“I was trying to bring together communities in Nyanza so that they can be together this time because last time majority of them voted for Baba while another percentage voted for the president so I was trying to show them them that this time we need to stick together together so that our numbers can be formidable. I was talking in Kisii land not even in Luo Land where I represent,” the Suna East MP said.

“When we go to Turkana or Mount Kenya we always localize the campaign so that the communities can feel part and parcel of our movement.  This is the same for every part of Kenya. We stick to every community and we give them rightful information that we have for them.”

The Suna East MP consequently stated that individuals implying he was spreading messages which will divide the country are only competitors who are wary of Raila Odinga’s great chances of forming the next government.

“I see this to be people who are shaken and I know they are shaken because Mount Kenya is their area but you could see when Baba visited there things changed. So they never expected that. All this is to incite the people. They smell fear and the people spreading Raila-phobia in the region are not ordinary people, it is being done by people like Gachagua, Ndindi Nyoro and others,” Mohammed said.

“They have secluded themselves and they have their own agenda. They want to have a government that is theirs They will tell you that this is the government of mama Mboga but they will never tell you whose government it is, which people and from what region. Kenyans will decide who that person will be.”