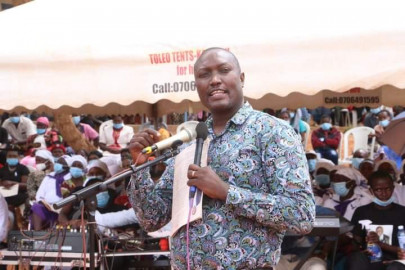 Kathiani Member of Parliament Robert Mbui has said politicians are not guaranteed votes from large crowds in their rallies.

“In the Kenyan situation, when a leader has a public meeting and there are a lot of people, somehow in the minds of opponents it seems to translate to votes... The reality is that if 10 people are competing for a seat, and the 10 people go to the market, all the people of that market should go and listen to the ten people,” said the MP.

“It doesn’t mean that when you have a bigger crowd then, therefore, you have more votes.”

Speaking when he appeared on Citizen TV’s Day Break show on Monday, Mbui stated that this is one of the possible causes of rivalry among politicians as they embark on campaigns for the 2022 elections.

“Some people are unhappy that maybe when one goes and big crowds form around them, it means they are ahead,” the Kathiani legislator stated.

“Probably these polls are based on those things, someone is coming out of the car there are a thousand or two thousand people in the market cheering, so they think we are ahead,” he remarked.

Mbui also condemned the violent chaos that marred DP William Ruto's rally in Busia on Saturday, saying the government must deal with those involved accordingly.

“In case there was somebody who paid these young men and women to come out and do that I would say it’s a big shame,” he added.

At least eight people have since been arrested while police are pursuing more suspects linked to the chaos.

Dr. Fred Matiang’i on Sunday said more arrests were expected for the masterminds and perpetrators of the incident.