'I will fly to Canada to bring Miguna Miguna back to Kenya,' former CJ Willy Mutunga says 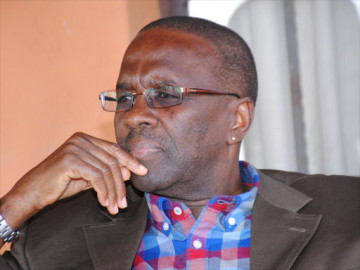 Former Chief Justice Dr. Willy Mutunga says he will travel to Canada to accompany deported  Lawyer Miguna Miguna back to Kenya next month.

“I have decided to travel to Toronto, Canada, to accompany Mr. Miguna on his flight back to his motherland on 16 November 2021,” said the former Chief Justice.

Dr. Mutunga, who served as Kenya’s chief justice from 2011 through 2016, said his decision follows personal reflections and consultations with lawyers, human rights and justice defenders, progressive politicians and Mr. Miguna himself.

In a statement published Wednesday, Mutunga said he had made the decision for two main reasons:

“First is because of the continued, flagrant and reprehensible defiance of the Government of Kenya, its agencies and senior officials, against the numerous valid court orders in favour of Mr Miguna.”

“The second reason ... is to support and defend the independence of our Judiciary, its authority and the people’s confidence in it,” he further stated.

President of the Law Society of Kenya Nelson Havi has also offered to accompany Willy Mutunga to Canada to bring Miguna back home.

"I am ready to accompany CJ Emeritus Dr Willy Mutunga to Canada to bring Miguna Miguna back home on November 16, 2021. The rule of law, respect for Court orders and the defense of the Constitution is the responsibility of all Kenyans in general and all leaders in particular," said Havi on Wednesday.

Miguna Miguna was first deported in February 2018 after taking part in the swearing-in of ODM leader Raila as the 'People's President' at Uhuru Park on January 30, 2018. He holds dual citizenship for Kenya and Canada, where he was deported.

“The Government of Kenya’s “red alerts” against Mr Miguna were issued illegally and in violation of not just his rights but also of international humanitarian and aviation laws. The issuance ... is not only a blatant disregard for the rule of law, but a descent into autocracy,” said Mutunga, who has been very vocal about human rights.

In February 2018, Justice Chacha Mwita then issued an order directing that the government facilitate Mr. Miguna’s return to Kenya and allow him unconditional entry at the time of his choosing. He further suspended declarations that Miguna had lost his Kenyan citizenship after acquiring Canadian citizenship.

Miguna attempted to return to the country in March 2018, but local authorities blocked and detained him for three days at the Jomo Kenyatta International Airport (JKIA). The government went ahead and expatriated him to the United Arab Emirates.

In December 2018 Justice Chacha Mwita awarded Miguna Ksh.7 million in damages and Ksh.270,000 for the damage of his house.

Later on in March 2019, Justice George Odinga found Interior CS Fred Matiang'i and other immigration officers in contempt of court and fined them Ksh.200,000 each for failing to facilitate Miguna's return.

“To date, none of the contemnors has purged their contempt. They, therefore, continue to undermine the rule of law and to violate the oath of office they took as state officers,” Mutunga said.

Mutunga is calling for, among others, withdrawal of the red alerts issued against Miguna Miguna by the government and issuance of a Kenyan passport to Miguna.

“Court orders are not suggestions. They are not requests. They cannot be disregarded without consequence,” he stated.