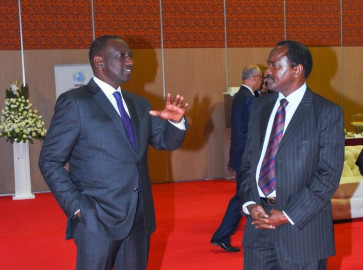 Wiper party leader Kalonzo Musyoka has dismissed claims by Deputy President William Ruto that he is the only way to Mount Kenya.

Kalonzo insisted that all regions in the country are open for all political parties and candidates eyeing the presidency in 2022.

Kalonzo, during a service at Covenant Church in Ruai on Sunday, rubbished Ruto's assertions that he had firm inroads in Mt. Kenya and now enjoys majority support in the region.

“Jamaa moja akasema ukitaka kuclimb Mt. Kenya unapitia kwake, I thought the authority Jesus had was that nobody goes to the father except by me,” he said.

Kalonzo insisted that the Mt. Kenya region is no ones stronghold and that anyone seeking to be elected as president has an equal share and access to shore up support in all regions across the country.

The Wiper leader, who has repeatedly presented himself as the ideal candidate from the One Kenya Alliance, said the outfit is keen on rooting out tribalism and corruption.

One Kenya Alliance leaders are expected to carry out extensive road shows and campaigns in the Ukambani region on Monday to popuralize the outfit ahead of the 2022 presidential race.